As we entered our final sessions of both the House of Bishops and the House of Deputies, we all heard great news on the COVID front. While there had been a small spread, it was insignificant due to the diligence of the planning team and all the participants. The infection rate, while low, was increasing daily, so the brevity of this year’s convention, while not ideal, will curb that increase.

While we didn’t always agree on resolutions or whom to elect to certain positions, our deputation had voted unanimously, for reasons none of us really know, to declare this a "Day of Pink." We all did our best to comply, even going out for a bit of shopping. Pink – it’s what deputies of Newark wear!

In this last day, the House of Deputies revisited an earlier resolution, amending it, and passed it again. It was Resolution A138 to “allow Committee Meetings and Hearings prior to the start of General Convention.” While we did this virtually prior to this Convention, it was by Special Order due to the shortened length of the in-person meeting. To make this option available in the future, this resolution was needed. It will not eliminate in-person meetings of legislative committees but will encourage the use of virtual platforms to facilitate the legislative process and broaden participation across the larger church.

Our deputation finally got to truly celebrate Laura Russell’s election to the Court of Review after the election process and Wi-Fi issues were resolved and the House voted once more on these important positions. Congratulations (again) Laura!

The deputies from the Diocese of Louisville, Kentucky were called to the dais to offer their warm invitation for everyone to attend the 81st General Convention of The Episcopal Church, which they will be hosting in just two years. While the 81st is unlikely to be “the fastest two minutes” in church life, they did say they look forward to welcoming us.

We ended the convention in the House of Deputies with many courtesy resolutions, and a special address by outgoing President Jennings. After adjourning the meeting Sine Die (with no appointed date for resumption), Jennings then handed the gavel to our new President of the House of Deputies, Julia Aylala Harris. A new era has begun.

Tonight, the deputies and bishops will explore Baltimore in various ways offered by the host Diocese of Maryland, all of which include dinner. Some are taking a harbor boat ride, some are going on a self-led walking tour, and others are going to the American Visionary Art Museum. Tomorrow, we head home – tired, but knowing that there is much hope for our work in the world as the Episcopal branch of the Jesus Movement. 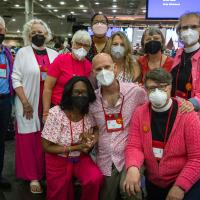 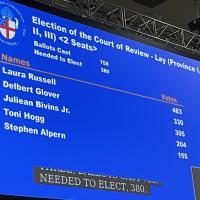