What's ahead for our Cathedral?

While the offices where the diocesan staff do much of their day-to-day work will be moving, our Cathedral – the seat of the Bishop – is staying right where it is at Trinity & St. Philip’s in downtown Newark. And with the recent arrival of its first full-time priest since 2014, it is poised on the cusp of an exciting time in its long history.

"Make no mistake, we're not going away,” says the Rev. George Dredden III, who arrived at the Cathedral on April 1 as a deacon serving as full-time clergy-in-charge and whose ordination to the priesthood was celebrated there on June 6. 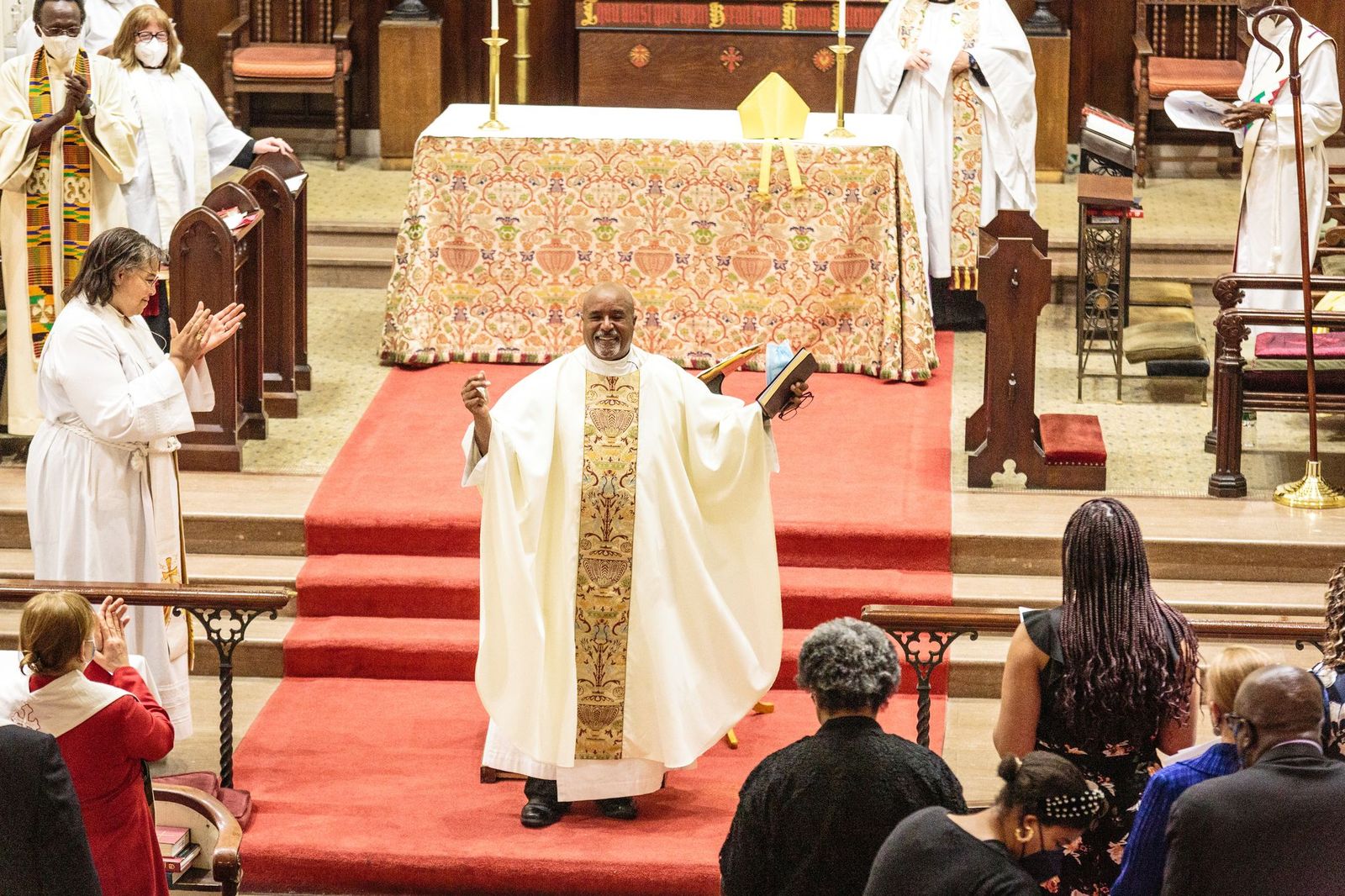 The ordination of the Rev. George Dredden III to the priesthood at the Cathedral on June 6.

“I'm very humbled to be here,” he continues. “There's such a loving congregation here. In spite of everything they've never lost hope and they've never lost their faith. And when I see the way that they approach with reverence what they do here – they're not looking for this pat on the back stuff, they're doing this because of their love of God and their love for that Cathedral, and they're doing, in many cases, so much with so little.”

“Getting George was a blessing. I'm happy he's here and I know the church is as well,” says Gordon Nelson, the Cathedral’s Senior Warden. “He's the right man for the job – I think God picked him before I did.

“He's got a good outlook with community,” Nelson continues, “opening up the church so that people know we're there.”

Dredden, whose career before his call to ordained ministry includes senior administrative roles in New Jersey state and county governance – most recently as Chief of Staff to NJ Assemblywoman BettyLou DeCroce – is now putting the networking skills he honed in political circles to use for developing ministry.

“I've had some discussions with different entities around the diocese about doing different types of partnerships,” he says, “and also for us as a congregation to become much more involved in activities outside of the Cathedral, where we go to other churches to participate and become more active and involved in the things that they're doing as well.”

He hopes to form partnerships between the Cathedral’s urban ministry and the ministries of suburban and rural congregations in the diocese. “We're right in the middle of a city, so we think that there is some real benefit to having those kind of cross-sections.”

Dredden is also exploring relationships with other denominations and groups in Newark.

“This is some fertile ground for some of the things that NJPAC is trying to do here – I'm building some relationships on that side as well as well as with other community entities and also within the political structure here.”

Under Dredden’s leadership, the Cathedral has recently reinstituted its Wednesday noon Eucharist and revitalized its music ministry. Recent visitors will have noticed that an area has been carved out to the left of the altar for musical instruments including the piano, drums, and an electric organ.

“We've got some wonderful musicians in this church – some of them had been professionals in another life, others are professionals now, others have talents that just amaze me,” Dredden says, “so we want to put that to good use. We do a mix between traditional and contemporary music here and it's been well received.”

The congregation is also looking outdoors. “I'd love to be able to utilize Military Park both in a more formal basis in conjunction with NJPAC and the city of Newark,” says Dredden, “but even more importantly you’ve got to remember we've got some grass space of our own – I’m also trying to see how we can utilize that in a much more visible way. Any way we can show that there's life here and vibrancy, we're going to do it.”

Dredden says that the Cathedral “was a very vibrant community for a good long time and now we're very happy to try to get back to that and then beyond. There's so much good work to be done here and there's so many people here who want to do it, so I'm energized to get to work.”

"It's hard work, he knows it," says Nelson, "but we have an opportunity to grow together. We're learning from each other."