What is the Holy Spirit up to in our midst, and how do we support that evolution? (Christ's Beloved Community)

Primary Questions: What is the Holy Spirit up to in our midst, and how do we support that evolution in our churches and in our diocese?

Secondary Question: What leadership do we need to foster this change?

They looked across Episcopalian and other protestant communities to seek out stories of congregations that suggest the birthing and ferment of the Spirit at this time. The following story (the second in a series of three) highlights a few of the traits named by Action Learning Team members earlier this year. (Click here for the first story.)

The story of Christ’s Beloved Community in Winston-Salem, NC begins with The Rev. Chantal McKinney. A Mexican-American born and raised in North Carolina, Rev. McKinney spent 10 years in traditional parish ministry, in fairly successful parishes that had plenty of members and money.

After a time, she felt called to build relationship with the poor and marginalized. She began worshipping and intentionally listening in to people in the southside of Winston-Salem. She wondered whether there was a desire among the people to create and be a part of a new community that focused on the neighborhood and the issues of the neighborhood in which they lived.

What Chantal understood before she even started was that the Episcopal church, and other sacramental churches, didn’t have a presence in these poor communities. She said, “We weren’t reaching out to them. They knew nothing about us.”

Chantal received a grant and hired a well known community organizer. She learned community organizing skills, asset mapping, going door to door, and how to engage in conversation with people on the street about a particular issue. From there, interested local clergy and lay leaders went out in twos. They talked to people, developed relationships, listened to their challenges and needs, and eventually, discerned an interest in forming a new church community. 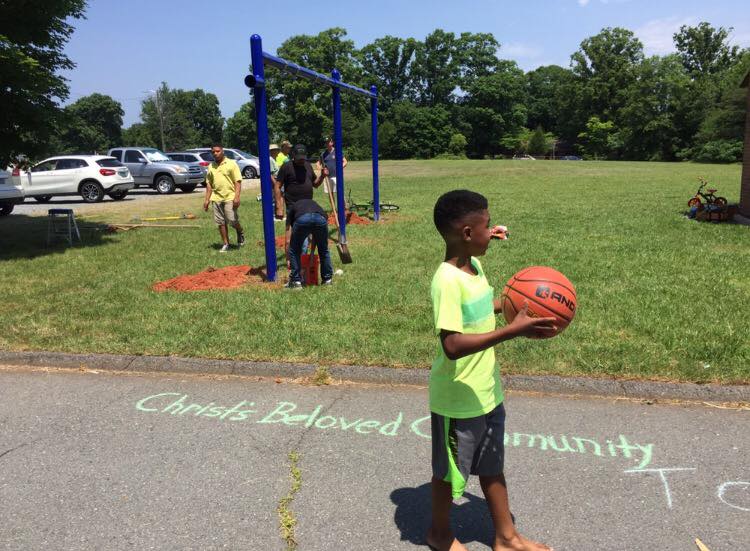 Christ’s Beloved Community (CBC) has taken shape. It is intercultural (African-American, Latino, Anglo, etc.), bi-denominational (Episcopal and Lutheran), and bilingual (English and Spanish), and open to everyone in the community regardless of belief, expression of faith, or any other difference.

CBC is an active presence in the neighborhood all week long. On Sunday, it looks similar to what you would see in an Episcopal church on Sunday. During the week, a bilingual food pantry offers ample nutritious food. The pantry offers client choice, meaning clients choose their own food. In the time before the food pantry opens, CBC offers coffee, snacks, and the opportunity to create community with one another. And with help from neighbors and area churches, a Beloved Community Center is being created. Renovations are underway to create several spaces for children, youth, and adults featuring a library, tutoring, legal resources, and free Wi-Fi.