Transformation through Mission: Stories from the Parochial Report 'Page 5s'

Our lives as Christians are shaped by stories – stories of Jesus, personal journeys of faith, traditions that shape each liturgical season. This year the Diocese of Newark invited congregations to share their stories of living into Christ’s mission to transform the world. To do so, the diocese added a page to the Parochial Report entitled, “Sharing Our Stories of Transformation through Mission,” also referred to as “Page 5.”

The Parochial Report collects data that is required of each congregation regarding membership, attendance, stewardship and finances. Through its own “Page 5,” the diocese offered a narrative way for congregations to share their mission and identity. Thirty-five churches submitted stories of individual, congregational, or community involvement in transformative mission. The completed Page 5s were sent with the Parochial Reports to the Episcopal Church headquarters in New York.

Over half of the churches who responded focused on their ongoing commitment to outreach, such as food pantries, soup kitchens, thrift shops, senior meals, and backpack programs. Involvement in their local food pantry led parishioners at Holy Trinity Church in Hillsdale, to plant a hay bale garden to grow fresh vegetables for the food pantry.

A few churches highlighted youth-led mission initiatives. Youth mission trip participants from Church of the Holy Spirit in Verona gathered over 400 dresses to send to Appalachia after they learned on their trip that many high school students in St. Paul, Virginia, can’t afford prom dresses. Youth at St James’ Church, Upper Montclair, led ghost tours through the church, donating the money raised to the diocesan Alleluia Fund for outreach and social justice efforts.

One third of the congregations in the diocese shared their mission stories via “Page 5” – an excellent response for the inaugural year – and even greater participation is hoped for next year. (Click here for the complete Page 5 submissions.)

Read on to learn about five transformational mission initiatives that are building the Kingdom of God around the Diocese of Newark.

Over a decade ago a partnership of parishioners and community volunteers recognized the absence of a hot breakfast program in Jersey City, despite multiple bag lunch offerings. Breakfast Plus! was born as a service to neighbors who are homeless or low-income. The church is situated near public housing for low-income families and senior citizens as well as the Grove Street PATH station, a gathering place for people who are homeless. Every Saturday and Sunday, Grace Church welcomes people for a hot breakfast prepared on site. An average of 200 people were served each weekend in 2011. 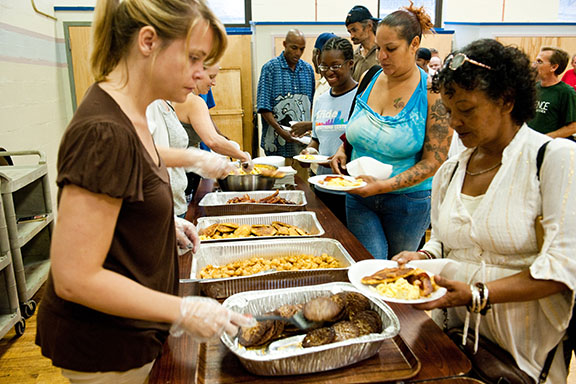 Over 90 volunteers from the parish and surrounding community are involved in this outreach effort, with 5 to 10 volunteers serving per breakfast. Volunteers “encourage people to feel safe to hang out, read a paper, and talk to each other,” said Dana Patton, a parishioner and regular volunteer. In the beginning the program primarily served men, perhaps because “men are more connected in the homeless community,” said Patton. There has been an increase in women as well as some families seeking out Breakfast Plus! Involvement in outreach ministries is a “healthy sign of a church that truly believes in the power of Jesus,” said Patton. “I’ve gotten to know a lot of the guys that come and I see them around town. We’ll say hi and talk about other things than the breakfast program,” Patton said. “Some guys have gotten on their feet, become of a part of the church or come back to volunteer. All around it’s a great way to form new bonds.”

Inspired by Diocesan Council’s Listening Campaign in 2010, St. Peter’s decided to hold their own Listening Campaign to hear from parishioners. Parishioners were invited to attend one of five kitchen table meetings, held after coffee hour on Sunday or on a weekday evening. Ginger McArthur serves on the Listening Team. Discussing the implementation of the kitchen table meetings, she said, “Initially, parishioners were not quite sure what was going on. But as we talked, members of the congregation became interested and animated.”

A common theme of children and community arose, with a focus on raising children with strong morals and values. “They were excited about this type of vision and this type of outreach. We’d never thought about this before, but realized this is what’s important to us, for the congregation and the community,” reported McArthur. Seeking to listen to others engaged in similar work, two members of the Listening Team and the rector, the Rev. Elizabeth Wigg Maxwell, visited the Ethics Institute at Kent Place School in Summit to learn about their approach to teaching ethics.

Members of the Listening Team are scheduled to meet with a local elementary school principal to gain his perspective on issues facing children today. The parish is working to build relationships in the community with the aim of hosting an event to promote ethical conversations among children, parents and educators. When asked what she would tell other congregations, McArthur said, “Don’t let your size stop you from taking on a mission or outreach program that you really believe in. Start small, work methodically toward your goal, and never give up.”

Game Night at St. Michael’s provides a social evening of games, music, food, friendship, and fun for adults with special needs on the third Friday of every month. Game Night originated through the prompting of a young adult parishioner with special needs who attended a similar event at a friend’s church. His mother helped organize the first Game Night in 2008 and continues to facilitate the program.

An average of 80 attendees come to St. Michael’s each month from Wayne and surrounding communities in Passaic and Bergen counties, including people who live in group homes and their aides. Some participants know each other from school or Special Olympics, and Game Night serves as a great opportunity to meet up again and socialize, playing board games or listening to music. 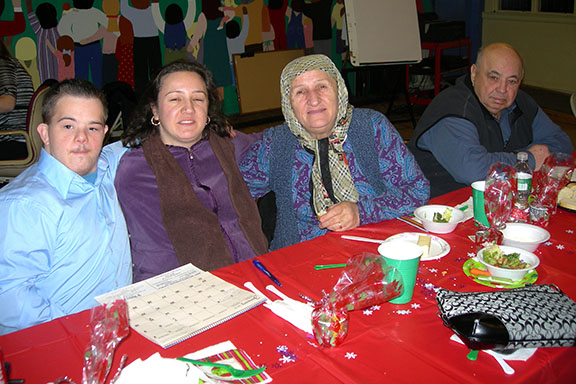 Michael Boudjouk, a St. Michael’s parishioner and regular Game Night volunteer, said that volunteers are “told by parents and aides how important Game Night is [for their children and clients] and how much they look forward to it.” It also provides an opportunity for parents to have three hours off once a month, knowing “their children are cared for and looked after,” said Boudjouk.

Eight to ten volunteers help in the kitchen and church hall each month. Volunteers hail from St. Michael’s and another local church as well as William Paterson University. On most Game Nights the menu consists of hot appetizers, pizza, salad, fresh vegetables, and cake. Barbeques are held in the summer, and holidays like Valentine’s Day and Thanksgiving are celebrated with special menus.

Boudjouk says that volunteering at Special Needs Game Night “lifts me up. It’s just what I need at the end of a tough week!” He adds, “It’s a blessing for everybody, a chance to give them a special night out and give parents and caretakers a break. It’s what God would want us to do with our time.”

Literacy Program of America – Church of the Epiphany in Orange

Parishioners at Epiphany are actively involved as volunteer tutors in the Literacy Program of America. The tutors dedicate themselves to sharing the gift of English literacy, motivated by their students’ own dedication and enthusiasm.

Epiphany shared the story of one particular student who began taking the literacy class at the parish in 2007. Babouche Nouioua came to the US in 1992 from Algeria and strives to keep increasing his English fluency through his participation in the literacy class. A diehard soccer fan, avid reader, and collector of antiques, Mr. Nouioua has donated several items to the church. Each year, he has received an award from the literacy program and he achieved his dream of becoming a US citizen in 2011. Mr. Nouioua is very grateful that volunteers from Epiphany help their neighbors to become more literate and fluent in English.

From the window of the parish’s storefront ministry on Main St. in Boonton, the Rev. Laurie Wurm observed local children hanging around after school in an empty lot. A connection was made with these children and others living in nearby low-income housing. Out of these connections the Light on Main Youth Group for children in grades 4 through 8 was formed, and now serves 15 children from fragile home environments. 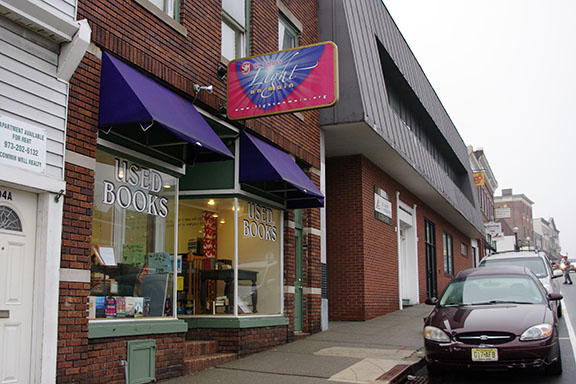 The youth group began with informal gatherings involving a meal, activity, and nondenominational faith conversations that led to outings for fellowship and service. On one occasion, youth group members and adult volunteers cooked meals together. The children then delivered the meals to friends and neighbors whom they identified as being in need of a hot meal.

Matthew DiLauri said, “For me it’s being witness to how kids need to be loved and cared for and told that things are going to be okay and they’re not alone. It’s an important message for all of us, no matter our age – we’re scared.” Recent bible studies have focused on God’s unconditional love for us. According to Brian Noodt, “We needed to build up trust slowly over the past two years. They’ve opened up and grown, they’re maturing.”

The youth group meets every two weeks, with either a formal event or a movie or game night. Community service opportunities are also provided.

Noodt advises other churches considering similar outreach to begin informally. “Listen to the kids’, and in a larger sense the community’s, needs and then respond. Don’t just launch in with your own ideas.”