They mingled among the Palm Sunday crowd at Christ Church in Bloomfield & Glen Ridge, but there was something different about these strangers.

Their clothes were from another era. The men had tzitzit hanging from their waist, the fringe of the Jewish prayer shawl, the tallit. The women’s heads were covered. They seemed from another time and place, and yet blended with the crowd. Everyone there had come to church that morning to raise a loud “Hosanna,” wave palm fronds, and remember the triumphal entry of Jesus into Jerusalem in the days before he was crucified. The visitors were the members of the Dzieci theatre company, who had come in from New York City to perform The Passion of Jesus Christ at the church.

Dzieci (djyeh-chee), the Polish word for children, is “an international experimental theatre ensemble dedicated to a search for the “sacred” through the medium of theatre,” according to their website. They have performed the Passion at various venues in New York City, including the Cathedral of St. John the Divine, but this was their New Jersey premiere.

Dzieci refined their text for the Passion “from the earliest existing translations, relying heavily on the Aramaic Pashita, incorporating Hebraic song and chant, and ritual elements of Judaism, and sets their piece in the shadow of the Warsaw Ghetto.” I first heard about this company from a colleague and dear friend, the Rev. Peter DeFranco, of St. Peter’s in Clifton, and after the vestry enthusiastically voted to fund them, I invited them for Palm Sunday.

Having never seen the performance before, I was not sure what to expect, even after going through the space with the director, Matt Mitler, and one of the actors, Ryan Castalia, a few days earlier. I removed the passion gospel from before the sermon (never liking it there anyway), and gave over the entire service after The Peace to this experience, as the communion would be a natural part of The Passion.

The morning of the service, seeing them dressed as they were, the performers warmly engaging with parishioners, greeting people at the door, the mood was already being set from the very start. They called it a “cold open,” as there was no introduction of them, or explanation as to who they were, or why they were dressed in this way. They sat for the first part of the service scattered among the crowd, rather than together. And in this way, the service began.

Just after the passing of The Peace, the entire congregation, over 130 people, moved to the back of the church, just inside the doors, where there is a 28-foot permanent labyrinth ingrained in the wood floor. There we encircled the performers, who led us into a different time and space with a Hebrew chant from Psalm 133: “Hineh ma tov uma na’im shevet achim gam yachad” (How good and pleasing for brothers and sisters to dwell in unity).

Though we know the story, none of us knew what to expect. The role of Jesus moved from person to person in the company, male and female, denoted by the wearing of the white prayer shawl. The narration was similarly passed, and read from a large scroll. Tears flowed across the congregation throughout the performance, as the intimacy of the space enveloped us all in the story – moving us from spectators to participants on the periphery. When Jesus, or Yeshua (all names were kept in Aramaic), was praying in the garden, he was bent over in fervent prayer right next to me – I could feel his anguish. I wanted to reach over and comfort him. My heart was breaking.

The bread and wine, blessed by Yeshua, was spread throughout the gathering, making the entire congregation one with the disciples. The dramatic arrest in the garden, the swords and spears made known by body movements of the cast, stunned us. Not a sound could be heard from the congregation as we looked into the plaintive eyes of Yeshua, silent in the face of his accusers, and then witnessed the now-female Christ breathing her last breath.

At the final moment in the “tomb,” a table with a light shining down upon it, they laid the scroll they had been reading, wrapped in the prayer shawl and reverently tied. It was the Word, as the Word – the Logos laid to rest. They did not explain it – they didn’t have to. It was so deeply profound. We were all welcomed to come forward to the tomb to kiss the sacred scroll. I moved closer, touched my hand to my lips, and then to the scroll. As more came forward, the company began the chant again, and we joined in this soft, rhythmic, recitation of the psalm. Standing just above this, I gave the solemn Prayer over the People (this was not decided ahead of time – it was just another part of allowing the Spirit to direct).

The Rev. Bob Solon, a staff member who attended the service, said “Worship with Dzieci today was beyond words. I was left speechless in the best possible way. An amazing beginning to this Holy Week.” Several parishioners kept humming the chant that had echoed throughout the performance long into the coffee hour that followed, as did I. Blogger and activist Christian Paolino said, “It was extremely powerful to experience the Passion story from the perspective of 1940s Jews, whose fear and uncertainty about the future was likely similar to that of Jesus’ close disciples.” Another parishioner remarked that they had never experienced anything like that before. As for me, I am still trying to process it all.

Perhaps Matt Mitler says it best, in his reflections after the service: “To be called, and called so deeply, to be present. To feel, to see, to bear witness. We found ourselves not acting in this context, but being acted upon. We were melted and poured out, like wine from a goblet. Drink of this... Barriers were dissolved. Actor and congregant indistinguishable. There was no us, no them, this holy Sunday morning, only we. What divine nourishment do we receive under such extraordinary conditions? And what sustenance do we provide in return? I am still reverberating from this experience, a communion in the deepest sense of the word.”

Next year, Christ Church is working with Dzieci to repeat the Passion on Palm Sunday, and also offer it on Tuesday of Holy Week, so that members of other congregations, and the larger community, may take advantage of this incredible experience.

More pictures and some short video clips are available at christchurchepiscopal.org. 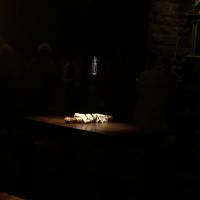 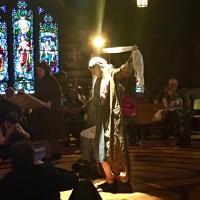 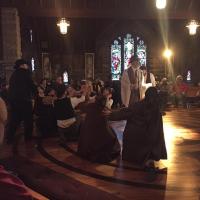 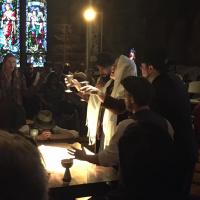