The second day of General Convention began with elections to key positions in the church within both Houses. The House of Deputies had the highly anticipated race for the next President of the House, as President Jennings’ last term sadly comes to a close at the end of this convention.

While there were many good candidates for President of the House of Deputies (PHoD), the race quickly came down to two viable candidates: Julia Ayala Harris from the Diocese of Oklahoma and Ryan Kusumoto of the Diocese of Hawaii. Ms. Harris won on the third ballot.

Newark’s own Laura Russell, Co-Chair of our deputation, was the top vote-getter (by 151 votes) for one of the positions on the Court of Review for Clergy Discipline, and we all celebrated… until we found out that the election had to be voided and re-done due to current geographical diversity requirements, which likely will be removed by a later separate resolution. So, while we put the balloons on hold, we know we will be bringing them out soon to celebrate her election.

The afternoon’s legislative session in the House of Deputies featured an intense debate over the considerations the church should adopt with regard to women’s reproductive health when choosing a site for future General Conventions. One resolution wanted the church to “consider” relocating the 81st General Convention, which is in just two years and scheduled for Louisville, Kentucky. Another, which asked that the 82nd General Convention site selection, and all future locations, take women’s reproductive health into consideration. The debate centered on two approaches to our gospel mission: On the one hand, Louisville is in a state that is restricting a woman’s right to make informed decisions about her own healthcare, so should we provide the economic boost our convention would bring. On the other, the choice of Louisville was in part due to a desire to respond to the murder of Breonna Taylor. The same was said for Orlando, and the Pulse Nightclub massacre (Orlando being one of the proposed sites for the 82nd General Convention in 2027). There was also concern about the resolution regarding Louisville, given that it is already a shortened convention, with newly elected leadership – would changing the location be achievable at this late date? In the end, D054 regarding the 81st Convention in Louisville was defeated, and A001 regarding the 82nd and subsequent conventions was passed with the following amendment:

As we closed out the legislative day in the House of Deputies, we did have much to celebrate outside of elections. A resolution re-uniting the Diocese of North Texas (formerly the Diocese of Fort Worth) with the Diocese of Texas brought tears to the eyes of many as we were reminded of the pain of the actions of the breakaway group caused to the clergy and people of that part of the Lone Star State. After the schism, in which the state courts allowed the ACNA to strip the parishes there of everything – from the use of the name of the diocese to the vestments and altar vessels – the people, per the testimony of deputies from that diocese, were devastated. However, their faith led them forward into resurrection that renewed their ministry, strengthened their ties with one another, and helped them to see where Christ was calling them into new life. Part of that call was to re-unite with the Diocese of Texas, who welcomed them with open arms. The passing of this resolution brought the House to its feet in joy, celebration, and wonder at the amazing grace of God and the great hope that abounds now in Texas.

We then turned our attention to a matter that is close to the hearts of many in our diocese, A063, to create a Director of Women’s and LGBTQI Ministries as a church-wide staff position. While three of us queued in to speak, the Rev. Cynthia Black and I were able to get to the microphone before debate ended to testify in support of this contested resolution. It was passed and we owe a great deal of thanks to Laura Russell for marshalling this through.

Meanwhile, the House of Bishops addressed the need for fair representation in the discernment process for elections to the episcopate and issues in the disciplinary process for bishops, and called for a cessation of the war in Ukraine and to tell the truth about racial injustice within the church, including the treatment of indigenous children at church boarding schools.

The House of Bishops also concurred with the House of Deputies on a number of actions, including creating a Task Force on LGBTQ+ Inclusion, and making paid family leave and health insurance for lay staff and clergy available through the Denominational Health Plan. And, the work of the bishops continued on the process and need for prayer book and hymnal revision.

It was another busy day for your deputation, but we know that the work we do is important, and there is more ahead as we move into our third day. Yet we know that as we enter the Lord’s day, we will unite in our morning services with Episcopalians across the wider church as we give thanks to God, ask for Christ’s blessing, and pray for the guidance of the Holy Spirit.

You can to follow along on all that is happening, including participating in worship, by going to the GC Media Hub. The sessions of the House of Deputies and House of Bishops, as well as media briefings from the Office of Public Affairs and #GC80 Daily Show videos, will also be available on demand on the Media Hub for those not able to watch the live stream. 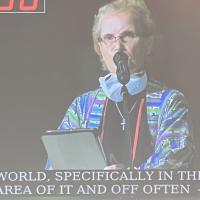 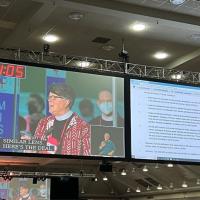 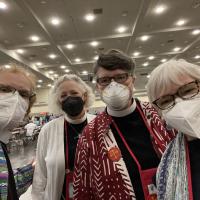