After a year of waiting, video hearings, questions about whether any of this would happen at all, the 80th General Convention of The Episcopal Church was gaveled into session in both the House of Deputies and the House of Bishops. There were moments of joy, frustration, anticipation, and humor, yet through it all we managed to get Convention going for the good of the Church and our Gospel mission.

The day began in worship, with our Presiding Bishop bringing down the house as he preached about the gap between Jesus and his followers – between the love we are commanded to offer, and what others understood the church to be in this world.

As both houses gaveled in, we discovered that maybe the house wasn’t the only thing brought down during the passionate homily. As voting members opened their V-Binders (iPads for work and voting) everyone soon found that there was no access to the internet. As many scrambled to try to fix the issue, everyone handled it with grace and humor, most especially the President of the House of Deputies, the Rev. Gay Jennings. Service was restored in time for the afternoon session.

As we continued, we took time for prayer and remembrance of those killed last month at St. Stephen’s in Vestavia Hills, AL. The members of Alabama’s deputation were brought forward to speak to resolution A226, which calls the church to recognize, honor, and lament the violence that took the lives of three members of that parish. The chair of their deputation, the Rev. Candice Frazer, began and ended her statement with this, from John 1:5: “The light shines in the darkness, and the darkness does not overcome it.” President Jennings then asked that the vote in favor come by the silent affirmation of standing. Not a sole remained seated, which was the loudest and most powerful affirmation of the day.

Later in the House, our deputation’s voices were heard on important justice issues, particularly racial reconciliation and truth telling. Deputy Anne Kitch and Alternate Deputy Elaine Thomas spoke to the importance of this work.

In the House of Bishops, there were long discussions on the proposed prayer book and hymnal revisions. There was also action in the world. The previous night there was a fatal shooting near our hotel and the convention center. The bishops took to the streets to call for an end to gun violence, with members of the House of Deputies joining the march.

There were also moments where this shortened convention was stress tested as people were calling for removing legislation off the Consent Calendar, which would move them to the floor for debate. While wanting to keep the convention short, and limit debate, all to ensure the safety of everyone attending, there was a building sense that too much had been placed on the Consent Calendar, and without the ability to speak to it at legislative committee hearings, voices had been silenced. These are the things that will inform us as we move from this convention to the next one, which is in just two years. In the end, some things did get removed and debated, and our good and faithful work continued into the night.

The day ended late in the deputation suite as we discussed the upcoming elections happening the next morning. The conversation was led by our Co-Chair, Deputy Laura Russell, and the discussion was helpful in our discernment.

You can to follow along on all that is happening, including participating in worship, by going to the GC Media Hub. The sessions of the House of Deputies and House of Bishops, as well as media briefings from the Office of Public Affairs and #GC80 Daily Show videos, will also be available on demand on the Media Hub for those not able to watch the live stream. 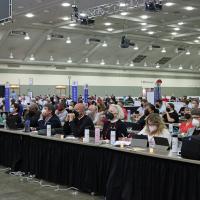 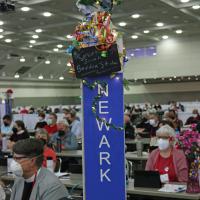 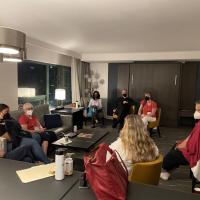