Presiding Bishop Celebrates a Century of Dreaming and Building at Incarnation, Jersey City

Church of the Incarnation was founded in 1910 in Jersey City, at a time when African Americans in the neighborhood were traveling to upper Manhattan to find an Episcopal Church that welcomed them. On Sunday, Incarnation welcomed the Presiding Bishop of the Episcopal Church to celebrate the Eucharist, culminating a year-long centennial celebration.

The Most Reverend Katharine Jefferts Schori paid tribute to Incarnation’s past, and urged parishioners to keep building and pursuing “the dream of a healed world, where everything that’s messed up or unjust or disordered is set right again.”

“This community gathers here to make this dream real, in this place and in this time,” she said in her sermon. “You aren’t just named Incarnation. You’re meant to be and become that dream for the world around you. You know from a hundred years of history that this dream is often challenging. Making that dream real needs all of us.” (Click here for the Presiding Bishop's complete sermon.)

One of the ways Incarnation pursues the dream is through its partnership with the Jersey City Episcopal Community Development Corporation, which builds affordable housing and provides food and social services connections for the homeless. Jefferts Schori met before the service with Carol Mori, Executive Director, and Peter Van Brunt, Board President of the JCECDC, and later praised the “very creative approach” the agency has taken. “They build double units, and the homeowner rents one out,” she said, thereby providing rental income to help the homeowner afford the mortgage.

JCECDC has provided 367 units of affordable housing in Hudson County. A recent development was named the Van Brunt Homes, honoring Peter Van Brunt, who helped found JCECDC 25 years ago. Next month the organization’s name will change to Garden State Episcopal Community Development Corporation, as they branch out elsewhere in the state.

The Incarnation service itself was a joyous affair, filled with energetic music that had the congregation swaying in the pews. Gail Blache-Gill, the parish’s first Minister of Music, has rejuvenated the music program, and the enthusiastic choir was backed on this day by a saxophone, brass section and drums.

The Rev. Joseph A. Harmon was priest-in-charge at Incarnation until earlier this year; he now serves as rector of Christ Church in East Orange. Incarnation is now in a discernment process that will help shape the next phase of its history. Fr. Harmon was greeted warmly by the congregation as he returned to welcome the Presiding Bishop and help celebrate the Eucharist, along with the Rev. Canon Gregory A. Jacobs, Canon to the Ordinary of the Diocese of Newark. 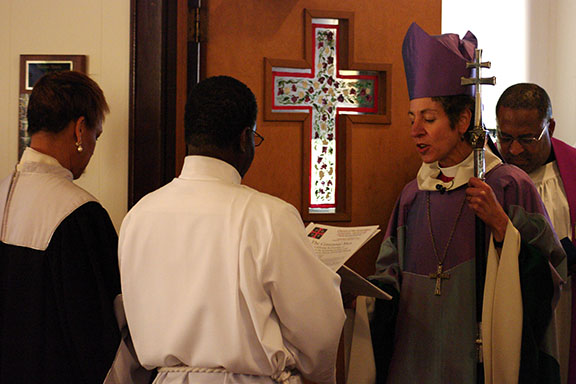 Also in attendance were the 10 interns from NEWARK ACTS, the young adult urban internship program of the Diocese of Newark. Now in its second year, NEWARK ACTS brings recent college graduates from around the country to live for a year in Newark and Union City and work for social change through service to others.

The interns met with Jefferts Schori before the service, and initially seemed to have a hard time talking comfortably. “You’re like a really big deal,” one of them told the Presiding Bishop, to general laughter. But soon they were chatting about the work they are doing for organizations including St. Philip’s Academy, the Seamen’s Institute and Integrity House.

Part of the purpose of NEWARK ACTS is to help in the discernment process for young people who are considering religious or service vocations. One of the interns asked Jefferts Schori to talk about her own “calling story,” and the Presiding Bishop described the path that started with a career as an oceanographer who had never considered the priesthood until three fellow parishioners independently suggested it. Later, a sabbatical spent visiting parishes throughout Nevada led to her election as Bishop of Nevada, and in 2006 she was elected to lead the two-million-member Episcopal Church. 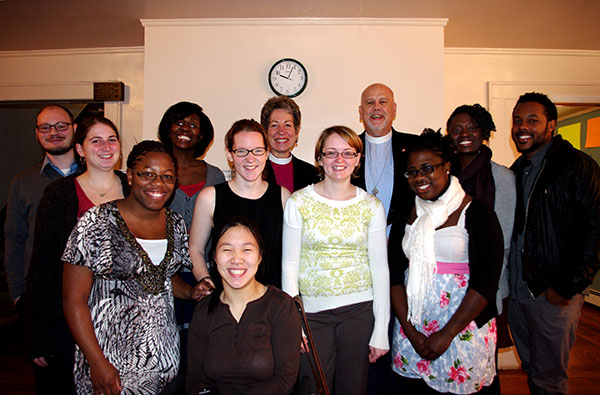 While several of the interns are Episcopalians, some of them represent other traditions as well. Although Jefferts Schori leads a denomination with a long rich history, she urged the interns to take advantage of opportunities to learn from other faiths. “The future is ecumenical, and in fact interfaith,” she said. “We need to not just interact, but build things together.”

Jefferts Schori later praised the interns and said “we need more. There’s a significant need for young adults” in social services and ministries, and programs like NEWARK ACTS “give the church a chance to see youth in a different way.”

Incarnation “has had a challenging history for 100 years, but they’ve built a remarkable legacy,” Jefferts Schori said, and are continuing to build as the parish begins its second century. In concluding her sermon, the Presiding Bishop exhorted the congregation to “trust the mystery, and keep on dreaming. Keep dreaming of that healed and holy community, and join others on the journey. Keep dreaming.”