In the Spring of 2015 I accepted my first call as a priest to be the part-time rector at Holy Spirit Verona. Wanting to build relationships within the town, I scheduled meetings with each of the other clergy. By September we were meeting monthly and decided to revive the town's annual Interfaith Thanksgiving Service.

The service had not been held in recent years due to several clergy transitions. Since 2015, we have had several churches and a synagogue participate in the service, held the Sunday afternoon before Thanksgiving. By 2017, the Jewish congregation merged with a temple in a neighboring town. In early 2018 that building was purchased by a Muslim group looking to open an Islamic Center.

Once that took place in March 2018, it became clear to me that our Interfaith Service would expand. After many emails and several in-person meetings the service (entitled Peace, Unity and the Golden Rule) was planned. I also invited a Rabbi just down the road in West Orange so as not to lose the Jewish representation. Unbeknownst to me, several of the Verona synagogue members had transitioned to that temple.

On Sunday, November 18 at 2:55 PM (5 minutes before the start of the service), the Imam and Rabbi had yet to arrive. But after a few deep breaths (and some pacing) who walked in but a Rabbi and an Imam (no joke!). A beautiful town-wide service, including the mayor, council members, chief of police and other town leaders, took place with a passage from the Quran read in Arabic, a verse from the Torah chanted in Hebrew and a portion of St. Paul's epistle to the Corinthians read in English.

After some prayers, music and an exchange of peace, attendees shared in some fellowship with food supplied by all congregations. As the Psalmist says, "how good and pleasant it is when sisters and brothers dwell together in unity" (Psalm 133:1). Returning to my hometown as a priest has been a real joy; events like this make my call even more joy-filled.

Check out the photo above taken by my husband, Randy Johnson. I call it "A Prayerful People." You will find a deacon stole, several priests' stoles, a kippah (a.k.a. yarmulke), a taqiyah (a.k.a. skull cap), and many smiling faces. This is the way the world should live. Salam, shalom, peace! 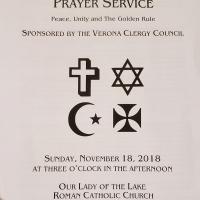 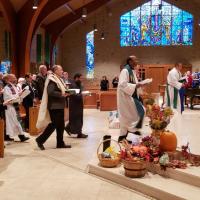 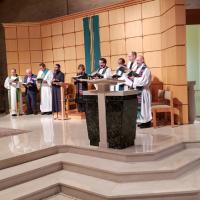 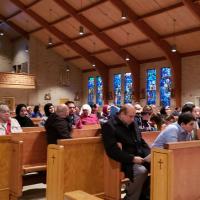 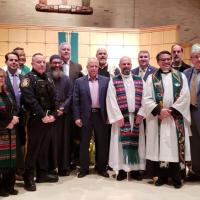 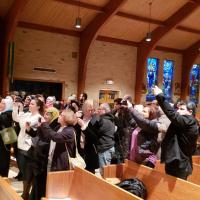