October 31, 2017
By:
Kirk Petersen
Tasha Scott is one of 18 students currently enrolled in All the Way Up. KIRK PETERSEN PHOTO

Like mothers everywhere, Tasha Scott is determined to help her kids get a good education. But she faces some special challenges.

Scott, 42, is an unemployed single mother of eight children, currently living in the Apostles’ House shelter in Newark. Her children range in age from 2 to 26. She dropped out of high school when she first became pregnant, having completed the 10th grade.

She’s preparing to take a test for her General Equivalency Degree (GED). “It’s my goal to do this for my children – and for myself, because I need it. I won’t give up until I get it,” Scott said.

Scott is one of 18 students enrolled this fall at All the Way Up, a tutoring program for adults in Newark. The program was launched last fall, with support from the Newark Diocese; Christ Church, Short Hills; and St. Paul’s, Chatham, among others. Classes are taught in a renovated classroom “all the way up” on the second floor of House of Prayer, Newark.

The program is an outgrowth of Newark Shared Ministries, a partnership between urban and suburban churches and agencies. All the Way Up has received funding from three diocesan programs: ACTS/VIM, the Marge Christie Congregational Support and Vitality Fund, and the Gertrude Butts Scholarship Fund.

Chris Whitaker, executive director of the program, said they learned from the first year of students that the standard GED preparation course was beyond the skills of some of them. This year they’ve expanded their offerings to include a pre-GED curriculum, “not just doing word problems, but also learning multiplication and division tables,” he said.

“We were kind of dangling this carrot out in front of students, that was almost unachievable within the time frame that they could commit to,” Whitaker said.

Christopher Jennings, the technology coordinator for the program, said the team visited other GED classes over the summer, and learned that a 15% passing rate “was considered really excellent. That was really eye-opening.”

“We really looked at meeting the needs of the neighborhood” while making adjustments for the second year, Whitaker said. “There are a lot of factors that go into why they don’t have an education. Poverty, joblessness, the public education system.” They’ve encountered students with a high school diploma who read at a second- or third-grade level.

The two are working to build partnerships with churches from other denominations and with other local organizations. They’ve connected with Mayor Ras Baraka’s Newark 2020 initiative, which aims to find full-time employment for 2,020 residents by 2020. Currently only about 18% of the jobs in Newark are held by Newark residents. The population is overwhelmingly black and Latino, yet 60% of the workforce is white. “There’s revitalization happening in Newark, and we want to be a part of that,” Whitaker said.

All the Way Up has added other adult skills classes, including job readiness and computer literacy. Many employers want potential employees to apply online, but “filling out an online application would be incredibly challenging” for some students in the program, Jennings said.

The students currently in the program “are incredibly motivated,” Jennings said. “We added a $25 fee this year,” so students would need to make a monetary investment to participate. Classes were offered for free last year, and some students came once or twice and then disappeared.

Classes are taught on Tuesdays and Thursdays from 10 AM to 1 PM, which is another change. Last year classes were two hours on Mondays, Wednesdays and Fridays, and it became apparent that it would be more efficient to have longer sessions.

In addition to the five subjects on the GED test – reading, writing, math, social studies and science – the program includes a creative writing workshop, to stimulate imagination and thought. “We try to create prompts that provoke creativity and convey a sense of who you are – asking about certain personal challenges, how they use courage, and goals and aspirations,” Whitaker said.

Although there are 18 students in the program, not all of them attend every session. On a recent day, three volunteer tutors were working with seven students. “The small-group tutoring this year has worked out really well, because they’re starting to form their own study groups outside of class,” Jennings said. There are enough tutors that each student can receive some one-on-one instruction – which some of them have never had before.

“The tutors create a safe space here. That’s something they may not get at other school settings,” Whitaker said.

Scott is a big fan of the tutors. “They give you support, they give you encouragement,” she said. “Their patience is amazing. They don’t get frustrated.” She plans to take the GED test in December – although her two oldest children, 26 and 19, are trying to convince her to join them in taking the test in November.

She’s looking for employment, and using what she learns at All the Way Up to work on a book, to be titled I Did It to Myself. “It’s my life journey. It’s about me, but it should help teen mothers, it should help abused women,” she said.

All the Way Up is working toward establishing itself as an independent 501(c)3 “so we can expand our revenue base beyond grants,” Jennings said. Currently the program is under the tax-free umbrella of the Diocese of Newark.

The program is seeking more volunteer tutors. Interested adults can apply through the About Us section of allthewayupnj.org. 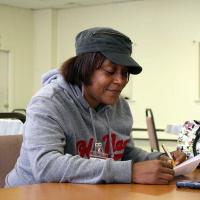 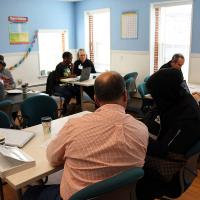 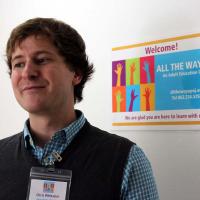