My day on Capitol Hill advocating for refugees and asylum seekers

When I registered several months ago for the Love God, Love Neighbor: Advocacy in Action event in Washington, DC, none of us – the organizers or the participants – could have imagined that our work on behalf of refugees would come during such an explosive news week. Just days prior, our nation grappled with the horror of the image of Óscar Alberto Martínez Ramírez and his 23-month-old daughter, Valeria, lying face-down in the waters of the Rio Grande, having died as they tried to cross from Mexico to the United States. The sin of our government’s policies were displayed for us all to see as I arrived on Capitol Hill to be trained and deployed for meetings with my state’s senators and representatives.

The event was organized by Episcopal Migration Ministries (EMM), for which I am the diocesan liaison, and the Office of Government Relations (OGR) of The Episcopal Church. Having grown up in the DC area, and as a former employee of lobbying organizations and contractors for the US government, I was excited to return to my home turf in this new role as an advocate for refugees and asylum seekers. While I had walked the halls of Congress before on behalf of other causes, this felt far more important to me on a deeply personal level.

Prior to our arrival, we were required to get up to date on the latest facts on asylum and the resettlement processes. We were also given links to our congressional representatives so that we could research their policy positions and legislative actions prior to meeting with them or their staff.

We all met in the United Methodist building located between the US Supreme Court and the Senate office buildings on Maryland Avenue. The first day was jammed with training on advocacy, messaging, and practice for the meetings. We were provided with talking points, policy positions, specific asks and recommendations. I went back to my hotel and crammed for my meetings with the staff of New Jersey Senators Bob Menendez and Cory Booker, scheduled for the next day. EMM and OGR had done their work, it was now time for me to do mine.

We were teamed with members of the local staff of either EMM, OGR, EPPN (Episcopal Public Policy Network), or another agency. However, it was made clear that this was our meeting, and that they would only engage as needed. My first meeting was at 10 AM with Alice Lugo, Counsel to Senator Menendez, and my policy expert was Kendall Martin, who serves as the Manager for Communications at EMM. My second meeting was at 1:30 PM with Daniel Smith, Counsel, Committee on the Judiciary, from Senator Booker’s office, and I was teamed with Jen Smyers, Director of Policy and Advocacy with the Church World Service.

After the arranged meetings, I headed out to two other offices, both on the House side, which was a long walk past the Capitol in the high heat. First, to my own district’s congressman, Rep. Josh Gottheimer, whose office was closed. Next, at the request of Jen Smyers, to Rep. Chris Smith of the 4th district, a Republican who lobbied to restart the bipartisan Refugee Caucus. I left each office with materials, and met briefly with a staff member in Rep. Smith’s office, thanking the congressman for his courage.

I ended the day walking back to my hotel in the blistering heat with sore feet, but a full heart. It is hard to describe the feeling of walking down those hallowed halls, but to have the opportunity to walk through the doors of governmental power to speak the gospel of Jesus to love God and neighbor was both empowering and humbling. It is my fervent hope that the relationships begun on this trip will continue as we work together to uphold the dignity of every human being, no matter where they are from, what language they speak, who they love, what faith they practice, what gender or race they are, for all are children of God, our sisters and brothers.

If you want to get engaged, please join EMM's Partners in Welcome. 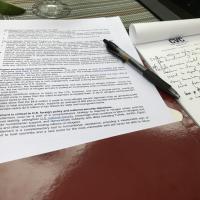 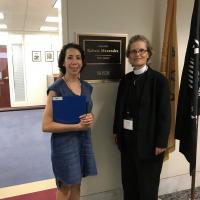 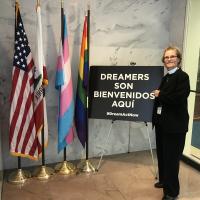 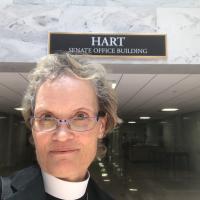 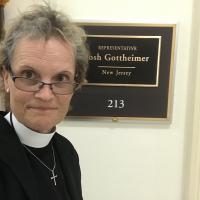 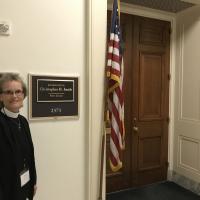 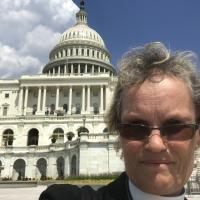 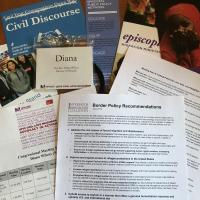