Friday night, a Facebook friend shared a news story about an Indiana hospital asking for protective masks amateurs could sew, and I headed up to the attic to dig through my late mother’s giant sewing basket. Sure enough, I had a healthy supply of sewing elastic, many spools of thread, and cotton fabric she’d used to make curtains for our guest room – I was ready to be the second coming of Scarlett O’Hara. I gathered the sewing shears, my sewing machine, and some thick cardboard to make a pattern for the six-by-nine inch fabric we needed. Sometimes, I pointed out to my husband, being a bit of a hoarder and a bit of a Girl Scout comes in handy.

I posted Friday night on the “in search of” Facebook group of South Orange and Maplewood, where I live. Did anyone want to try this pattern? Did anyone have more sewing elastic? Amazon could deliver by mid-April, the fabric store was out of stock, and people were posting mask patterns for breathing through bra cups. There had been a run on elastic in the two days since the mask story appeared. Did anyone have colorful cotton by the yard?

Dear lord it felt so good to sew, to do something tangible to protect important people, after days of watching the world collapse in slow motion, like the walls of a sand fort, like a calving glacier. Each dip of the machine’s needle stabbed through all the inefficiency, miscommunication, and lack of resources I had watched in the headlines. Each completed, straight seam was a glass raised to the health of a doctor or nurse who is far braver than I am, and far more at risk.

I set up boxes on my porch so people could donate fabric. I put jars of daffodils from my garden next to it, for people to take home. I taught my husband how to cut flannel, and he posed with scissors in hand, a kerchief on his head, and his biceps out, “Rocky the Riveter." My daughter, home for the duration from a closed university, cut elastic in seven-inch pieces.

Bags of pre-cut quilting fabric in cheerful colors showed up. I delivered yards of elastic to a neighbor who sews, I received three finished masks from a fellow freelance writer, and I have a promise of flannel pajamas from a friend in town. “You need flannel? Alert the lesbians! I'm headed to the closet right now,” she wrote. A friend from St. Stephen’s in Millburn delivered immediately, with an armful of flannel shirts and pajamas in Blackwatch plaid. A former neighbor from Maine offered to order me some LL Bean sheets to cut up. Dozens of sew-ers reported for duty via Facebook messages. SOMa Sewing Volunteers appeared on Facebook as a separate local group, and we shared strategies.

At noon, I paused the sewing machine and started pinning, a quieter action, so I could call Laura, one of my best friends from sixth grade (and the first female warden at her Episcopal church in central Jersey.) Our other dear friend, Diane, was trying to hold a funeral for her mother outside of Chicago, right as we spoke. Laura and I couldn’t be there, though these old friends had stood firmly by my side when my parents died. Diane’s father couldn’t attend the service for his wife of 61 years, and Diane couldn’t visit him now, as his retirement community is closed to visitors.

As the day passed, I worked through a dozen masks. By mid-afternoon, I had a guy: my very own elastic supplier, a husband of a friend from two streets away who works for Atlantic Health Systems. We met in my front yard, and he tossed me a heavy spool of white elastic – enough for 370 masks – and promised to deliver finished masks from my porch to nearby Overlook Hospital, Morristown Memorial and others – one side cotton, one side flannel, three tucks in the front.

In the days since, SOMa Sewing Volunteers have delivered more than 550 masks to Atlantic Health Systems hospitals, a home care group affiliated with Atlantic, and Newark Beth Israel Medical Center. Parishioners from St. George’s in Maplewood have been particularly helpful, with Aleeda Crawley sewing up a storm and creating a department of sew-ers supporting mail delivery people in South Orange and Maplewood, and Marymae Henley delivering masks to a senior living community. Lisa Basile, Valyrie Laedlein and Larry Jameson of St. George’s and Peter Wick of St. Stephen’s have been ready volunteers, joined by other local Episcopalians, Meredith Brehm and Leonora Hartley.

As I sit on my sofa and watch strangers come to my open front porch (no need to touch doorknobs) I am witnessing love in action. Bounty, abundance, charity and kindness emerge from the cars parked briefly in my driveway. A mother with two-and-a-half-year-old twins stops by for materials, followed by one is out with her three children and husband, for a bike ride (how do they do it?) A 79-year-old woman, 600 miles from her sewing supplies, needs a loaner machine and materials, and a delivery person and machine lender pop up, happy to wipe down the machine with wipes for good measure. I’m reminded of Bishop Jack Spong’s interpretation of Jesus and His message to us: Love wastefully.

Love through actions. Love so that others may live to their fullest.

Love, and sew, so that others have a better chance of surviving.

We are ingenious, connected beings. We may be able to pull together w­ell enough, city by town, state by neighborhood, and get through this. Maybe we can borrow the idea of a potlatch from the Pacific Northwest, where I lived for six years and left a bit of my heart (St. Mark’s Cathedral! Its weekly Compline service!). Maybe as other crucial items become scarce, we’ll gather in a ceremony where everyone gives away what they have, for the joy of it.

We crafters, like many humans, are determined people who keep sane by keeping busy. Maybe cooks are the same way, and woodworkers, and gardeners. Maybe our neighbors can get us through what looks too grim from 10,000 feet up.

I have a boxful of colorful masks on my porch that argues in the affirmative.

Tina Kelley is a journalist, poet, and co-author of Almost Home: Helping Kids Move from Homelessness to Hope. She grew up in St. Peter’s in Morristown, and spends her Sunday mornings toggling between sermons at St. Stephen’s in Millburn and St. George’s in Maplewood. 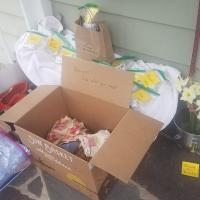 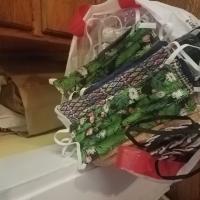 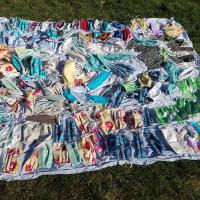