A hymn often sung for All Saints’ Sunday opens with the words, “I sing a song of the saints of God...” and numbers among the saints doctors, soldiers, sailors, teachers and even shepherdesses and queens. But to this list should also be added those members of our congregations who have served for years with distinction and commitment.

The David P. Hegg II Lifetime Achievement Awards, offered annually in late May or early June, is a wonderful opportunity to honor these saints among us. Named in honor of the late Rev. David P. Hegg II, whose commitment to matters of retirement, aging, and the role of older members in the congregation inspired the formation of Senior Ministries, the award recognizes those age 60 and over who have made significant contributions to their faith community.

“Before the awards began some twenty years ago, seniors could serve in parishes for decades and sometimes receive very little formal recognition,” said Hope Lampe, who organized for the Hegg Awards for many years. “The Hegg Awards ceremony, held each Spring, is their day to shine and be recognized.” Starting this year, Michael Otterburn has taken over from Lampe as organizer of the awards.

Each congregation may name two honorees each year. About two months prior to the awards ceremony, Senior Ministries invites clergy and wardens to submit the names of their congregation’s honorees along with a brief biography of each. A donation of $25 is suggested to help cover administrative costs.

The Hegg Awards are presented by the Bishop during a service of Evensong which is preceded by a festive afternoon reception. Honorees are photographed with the Bishop as their award is presented.

Here are just two of the 72 honorees who received Hegg Lifetime Achievement Awards in 2019.

John L. Smith, a member of Trinity & St. Philip's Cathedral in Newark, currently serves as a vestry member at the Cathedral and in the past has served as a warden and as a member of a wide variety of committees.

A committed Christian before finding the Episcopal Church in 1987, Smith quickly embraced his new spiritual home. “My life in the church has been so uplifting and has brought me such blessings,” he said in a recent interview. “I hope I’m right in saying it’s also made me a more humble person.”

Smith’s service to the community outside the church is equally impressive. An active member of the NAACP in Newark, he has also served as the organization’s president. Smith shares his knowledge and experience as a retired Newark Police Detective by teaching Criminal Justice at Essex County College, something he has done for the last 26 years. “Receiving the Hegg award was a great honor,” he says.

Gail Blache-Gill currently serves as Minister of Music at the Church of St. Paul & Incarnation in Jersey City. An acclaimed musician both in the Episcopal Church and throughout the music world, she has performed as a soprano in George Gershwin’s Porgy and Bess, as well as conducting the opera throughout Europe, New Zealand and Japan. Yet she says her greatest satisfaction comes from helping young people to use their singing talents in worship. 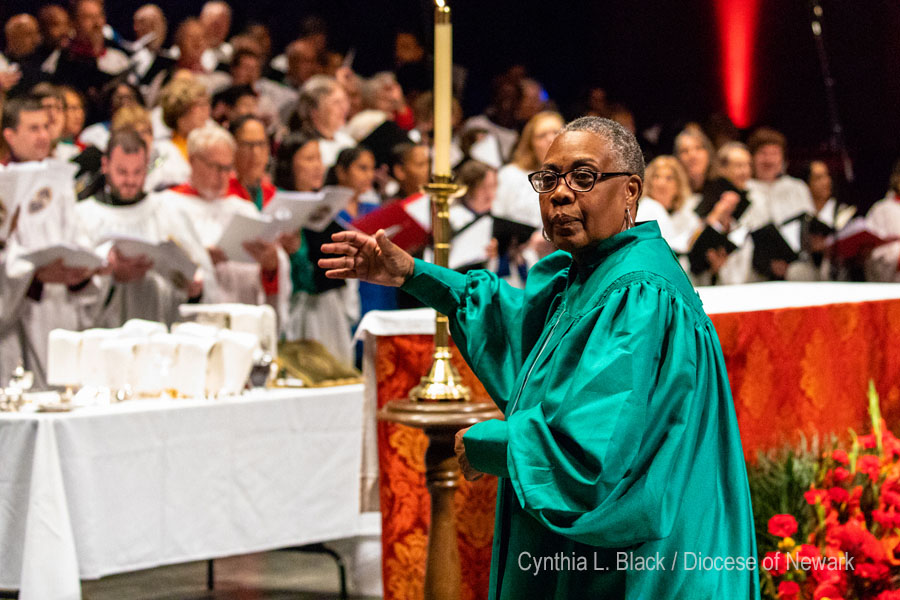 A native of Trinidad, Gail has also been guest conductor with numerous New York City choirs including those of Riverside Church, Middle Collegiate Church, and the Voices of the Spirit Choir at St. Charles Borromeo RC Church in Harlem. “Singing is my passion, music is my ministry,” she says. A deeply faithful and compassionate woman, Gail says her favorite quotation is from Duke Ellington, “Everyone prays in their own language, and there is no language that God does not understand.”

The members of Senior Ministries encourage clergy and wardens to start thinking about who their congregation might honor at the 2020 ceremony scheduled for Pentecost Sunday, May 31. Randy Johnson, Administrator of Diocesan Ministries, serves as contact person for the awards and is pleased to answer any questions you may have either by email or by phone at 973-430-9906.

Let’s be sure these saints receive the recognition they are due!