On Saturday, March 4, 125 individuals representing 43 congregations attended the kick-off gathering for the three-month “Listening Excursion” announced at Convention in January. After a busy four hours they went home with tangible first steps for introducing simple practices into the life of their congregations that will help them listen to God, each other and their neighbors.

Two other groups, the Going Local congregations and the clergy from the Listening Excursion congregations, joined them for the opening and closing events, and met separately during the middle portion of the program.

The Listening Excursion flows directly from the 143rd Annual Convention held January 27-28, at which all interested members of the diocese were invited to join clergy and elected Deputies to practice listening exercises.

“After participating last year in the Action Learning Teams and Listening Table exercises, it is terrific for me to see how the Joining God initiative is starting to quickly spread now to a broader group of individuals and parishes throughout the diocese,” he said.

The Grace, Madison team left the kick-off with an elegantly simple plan: the congregation had already scheduled parish “Community Building” meetings as part of their rector search process, so they decided to incorporate the “Listening to one another” exercise used at the kick-off, thereby introducing listening practices into the life of their congregation without the need to schedule additional events.

In addition, they plan to listen to their community by including in their parish profile process a "community listening tour" consisting of conversations with Madison community leaders, and to listen to God by introducing Dwelling in the Word at their vestry meetings.

Each church team participating in the Listening Excursion has been assigned a Companion who will check in monthly to listen, encourage and offer resources. The Companions, who include lay people and clergy long involved in the Joining God in Shaping Our Future initiative as well as some members of diocesan staff, will themselves meet regularly to support one another.

The church teams will gather again on Saturday, June 3 to reflect together on what they experienced and learned during the three-month Listening Excursion.

When the Going Local congregations moved to another room for their quarterly check-in meeting, there was a new congregation in their midst: Christ Church, Newton, which joined the Going Local process in December 2016. Beth Batastini, one of the Newton team members, said she arrived feeling exhausted from a long week and wondering why she’d agreed to give up part of her Saturday, “but I ended up loving it,” she said.

She arrived late due to a GPS error, and when she saw the large gathering, she said to herself, “We’re part of something that’s growing.”

The combined groups started the gathering with Dwelling in the Word. Batastini described being fascinated that her Dwelling partner approached the scripture with “a completely different spin from anything I’d ever heard. And I went, ‘Wow, now I get it!’”

Batastini said she “felt the hand of God at work” in her attendance Saturday when she took the last empty chair in the Going Local breakout room, next to a stranger from another congregation – and then discovered that the woman is close to one of her nursing patients. The woman gave Batastini a hug to pass along to her patient, and they took a selfie together to mark the occasion, parting as new friends.

Batastini described having a revelation about the importance of listening while on the drive home with a fellow Newton team member. Although they were long acquainted, “I found out so much about him. Learning how to talk to somebody is massive – we don’t know how to do it!”

“I can’t wait until next Sunday to bring this experience back to our church,” she said.

While the Going Local congregations were meeting separately in one room, in another room the nine clergy of the Listening Excursion congregations met separately with three members of the first Clergy Missional Cohort – the Rev. Keith Gentry, the Rev. Sheelagh Clarke and the Rev. Diane Rhodes – to learn more about how Clergy Cohorts function as both a learning community for professional development and a support group.

“What I love about our clergy is that they’re authentic and blatantly honest,” said Gentry, who says that the attendees, many of whom were skeptical, asked him, Clarke and Rhodes “serious and hard questions” about their Clergy Cohort experience, as well as some important aspects such as Dwelling in the Word. Their cohort began in March 2014 and had the option to disband after 18 months, but Gentry said “it was such a profound experience for us, we felt it was imperative to continue to meet,” even after some members retired or moved away. “It’s an opportunity to address our own adaptive challenges, to learn how to be effective leaders in a changing church,” he said.

Gentry added that some of the attendees described having difficulty finding a group of clergy colleagues for mutual support, and so the support group aspect of the Clergy Cohorts had a strong appeal for them.

By the end of the gathering, four of the clergy attendees had expressed interest in joining the next Clergy Cohort. Another four or five clergy will be sought to join them.

The March 4 kick-off of the Listening Excursion was an energized and energizing event. On June 3, attendees will return to St. Elizabeth's in Ridgewood to tell their stories and hear what is happening all over the diocese, as we join God, already at work ahead of us in our congregations and neighborhoods. 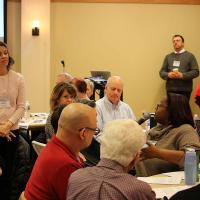 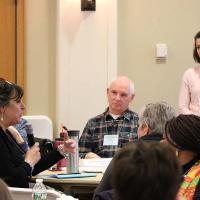 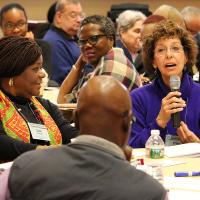 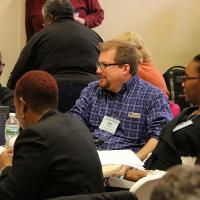 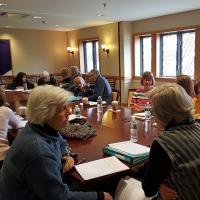 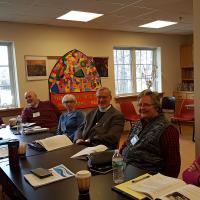