It started with a Facebook post and a chance cross-country friendship. It turned into what became a very long email chain on the Newark list. By the time it was over, a bunch of Episcopalians in northern New Jersey had helped feed a group of high school kids from the West Coast, because the kids had left their shoes in a foreign country. There’s also a Connecticut angle.

Last Thursday, as a severe winter snow storm was creating brutal conditions for much of the East Coast, Selene Nesland and four other chaperones were leading a group of 20 kids from five high schools home to Vancouver, Washington, a suburb of Portland, Oregon. The group had traveled to the Dominican Republic with Courts for Kids, a nonprofit organization founded by Nesland and her husband, which brings volunteers to impoverished areas to build or repair courts used for sports.

The group spent more than a week in shirt-sleeve weather at Red Misericordia, a Christian orphanage in Santiago, whose name translates roughly as “Mercy Network.” They built an outdoor basketball/volleyball court – “just a simple, concrete structure, but something [the orphanage] wouldn’t have been able to do on their own,” Nesland said.

The group was due to change planes in Newark, and Nesland said they had been isolated from technology and did not know of the pending storm in time to make arrangements to change planes in a different city. Once the plane landed in Newark, nobody was flying anywhere. United Airlines said the earliest they could get the group on a plane would be Sunday evening.

They weren’t stuck in the airport itself – they got a good deal on rooms at the Wyndham Garden Hotel at the airport. But they were faced with spending up to three days stuck inside, eating expensive hotel food, because they were dressed for warm weather in the Dominican Republic.

Many of them were wearing sandals or flip-flops. They all had proper shoes when they left home, but at the end of the trip they decided to donate the shoes off their feet and their extra clothing to the orphanage where they had been working. “I left my shoes behind, too,” Nesland said.

Nesland posted about the group’s circumstances on Facebook. She’s an active Episcopalian, and a childhood friend of the Rev. Curtis Farr, an Episcopal priest in Fairfield, Connecticut, who saw the Facebook message.

Farr had gone to seminary with the Rev. George Wong, rector of Church of the Saviour in Denville, and sent him an email asking if anyone might be able to help the group with warm clothing, socks and footwear, games and home cooked meals.

Wong saw the email but was not available to act on it, so he asked his parish administrator, Marge Tidey, to see what she could do. She emailed Nina Nicholson, Director of Communications and Technology for the diocese, asking for advice. Nicholson suggested forwarding the email to the Newark list, which Tidey did.

From there, it was off to the races.

Offers and ideas poured in from throughout the diocese, and the email chain grew longer and longer. The Rev. Kathryn King, rector of St. Alban’s in Oakland/Franklin Lakes, volunteered to bring food on Friday, and set to work preparing a batch of taco fixings. Archdeacon Chris McCloud said she lived very near the airport and wanted to help with snacks and socks.

The kids wanted to take a trip into New York while they were in the neighborhood, but that would have required donations of coats and warm outfits, and the hivemind quickly determined it was impractical.

King and McCloud ended up coordinating the effort on behalf of everyone who chimed in on the email trail:

“Considering the weather conditions, it was very heartening to know that people were willing to take a risk and do what needed to be done,” McCloud said.

It became clear over the course of Thursday that the best practical way to help was to bring food, games and some comfortable clothing. So Friday morning, King and McCloud brought their tacos and socks and snacks to the hotel and spent an hour and a half with the kids. King’s 16-year-old son, Nicholas, had a snow day and offered to help gather games and carry stuff.

King said she had spent so much time making taco fixings that she had fallen behind on creating props for the church’s Epiphany pageant, scheduled for Sunday. She had dowels and string and stars and hardware, so she brought the materials and asked the kids if they would assemble 18 stars dangling from sticks. “I think they knocked it out in like 10 minutes, and they were happy to do so,” Nesland said. “The one thing we had on our hands was time.”

Preparations were continuing for further support on Saturday and beyond, but a happy ending intervened. Late Friday afternoon, McCloud reported to the Newark list that the airline had come through with a flight to Portland that afternoon for most of the group. The remainder flew out on Saturday morning, Nesland said.

“It was a last-minute thing – they called us and said, ‘get the kids to the airport right now,’” and the kids scrambled to pack up their belongings.

So the meal Hernandez had made never went to the hotel – McCloud said she believed it was diverted to a soup kitchen. All the other volunteers were told they could stand down.

Nesland said that local television stations in Portland had covered the story*, and people responded by making donations. “Between you guys helping us with meals and snacks, and people giving, we were able to cover all the costs” of the hotel stay, she said.

“You have no idea how much that meant to our students. They kept saying, ‘why are they doing this?’” Nesland said. “They were all on the giving end in the DR, and now coming back they were on the receiving end. It was really good for them to experience.” 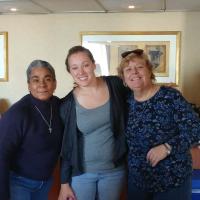 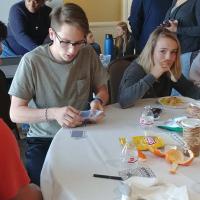 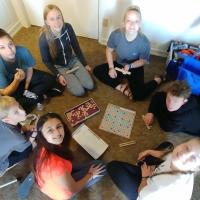 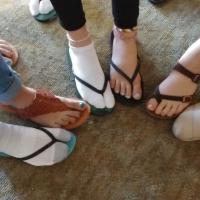 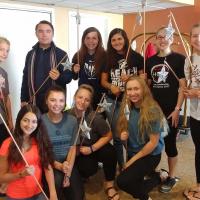