On Monday, July 9 General Convention returned to a full legislative day, and so did our deputies and bishop. In the House of Deputies, two important resolutions were debated and adopted, both involving members of the Newark deputation.

Resolution D019 – Ending Church Complicity in the Occupation called for The Episcopal Church’s investment strategies to include “a human rights social criteria investment screen based on the social teachings of this Church,” especially with regard to the Israeli occupation of Palestine (the West Bank, East Jerusalem and the Gaza Strip). The goal was to ensure that we continue to follow our moral obligations in the way in which we invest our funds, as we have when the church has withdrawn investment in tobacco companies, the prison industrial complex, and companies in South America during Apartheid. This resolution seeks the same restrictions on companies that participate in, or profit from, the occupation of Palestine, including HP, Caterpillar, Motorola, and Trip Advisor. It was Deputy Laura Russell’s Committee, Social Justice and International Policy, and she was a driving force behind its passage today in the House of Deputies. Read more at Deputies back plan to end financial complicity in Israel’s occupation of Palestinian lands (Episcopal News Service).

The Rev. Cynthia Black was the first deputy to testify to another important resolution, B012 – Marriage Rites for the Whole Church, which sought to strengthen and expand the availability of the blessing rites authorized in 2015. This resolution also passed. Read more at General Convention moves one step closer toward sacramental marriage equality (Episcopal News Service).

The House of Bishops (HOB) began their session with the two previous Presiding Bishops, Frank Griswald and Katharine Jefferts Schori, thanking Presiding Bishop Michael Curry for his focus on love. Bishop Katharine said, “May you survive the next 6 years with continued grace and increasing understanding of how well you are loved. God bless you.” Both received a standing ovation for their service and their comments.

Then it was time for the House of Bishops to consider resolution A068 – Plan for the Revision of the Book of Common Prayer, passed by the House of Deputies on Saturday. The HOB operates in a different manner than the HOD, in that it is less procedural and more colloquial. This is in part due to the smaller number, but mostly to their meeting with one another more than once every three years (and with far less turnover). So rather than starting in with debate, they held table conversations, then they had discussions not characterized as “debate,” then there was formal debate as one would see on the floor of the House of Deputies – two minutes each for those who rise to a microphone, within a set period of time. This journey took the remainder of the legislative session, and the arguments were on both sides. The vote will be the morning of July 10.

Outside of the legislative sessions, July 9 was both Camp Shirt Day and Purple Scarf Day.

Camp Shirt Day is a tradition in which deputations are asked to wear the shirt of the Episcopal camp in their diocese. The Newark deputation was proud to wear shirts from Cross Roads Camp & Retreat Center.

In addition, our deputation joined with others in wearing purple scarves in support of a more inclusive episcopacy, specifically women. The Rev. Helen Svoboda-Barber, who herself is a nominee for bishop in the diocese of Kansas, helped to spearhead the event, which drew many from both houses. She spoke about her doctorate work, which showed that when an “other group grows to 17%, people perceive the group make up as 50/50. However, it normally takes 30% “other” for the other to make systemic change." Currently, 9% of our bishops are women. Bishop Chip Stokes, of that “other” NJ diocese, called on all of us to advocate for more women in the HOB.

This long day ended in a feast. Everyone at General Convention from the Diocese of Newark – the deputation, the youth contingent, exhibitors –gathered in the Bishop’s suite for Gus’s Fried Chicken. We had a chance to catch up with each other, and with the young adults of our diocese, who arrived the afternoon of July 8. 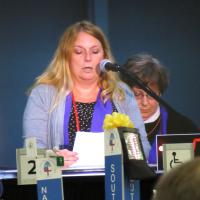 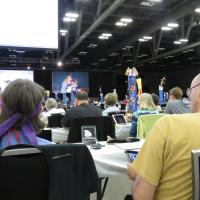 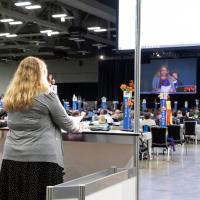 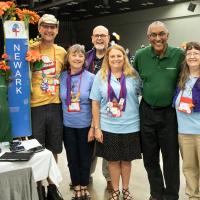 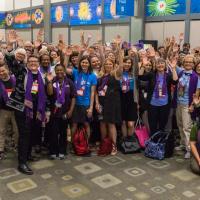 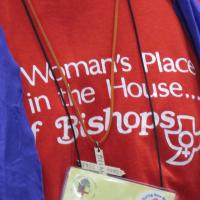 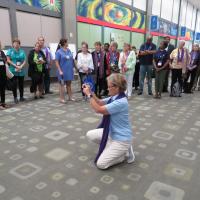 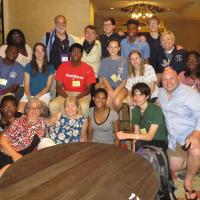 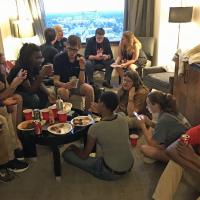