Diocese of Newark at General Convention, July 10 & 11: Working hard with the end in sight

July 12, 2018
By:
Nina Nicholson, Director of Communications
The deputation of the newly restored Episcopal Diocese of Cuba is applauded in the House of Deputies. CYNTHIA BLACK PHOTO

As the conclusion of General Convention gets closer, deputations are working harder to debate and vote on over 500 resolutions. Here are some highlights from the past two days.

Members of the Newark deputation also were following Resolution D019 - Ending Church Complicity in the Occupation, which sought to develop a human rights social criteria investment screen in response to the Israel / Palestine crisis. The resolution was passed by the House of Deputies, but voted down by the House of Bishops. Bishop Mark Beckwith spoke in the House of Bishops supporting the resolution, and is quoted in the Episcopal News Service article Bishops reject Israel-Palestine resolution blasted as ‘divestment’ despite deputies’ approval.

A resolution that has attracted widespread interest and discussion throughout the Church is A068 - Plan for the Revision of the Book of Common Prayer. The original resolution proposed to begin a process in which it was intended that a revised Book of Common Prayer would be available in 2030, following trial use and approval by two successive General Conventions, and with an anticipated cost over three triennia of $8 million. Among the resolution's goals was the desire to utilize inclusive language for humanity and divinity (see Committee hears call for inclusive-language Book of Common Prayer, ENS). The House of Deputies approved the resolution (see Deputies vote to begin process to revise Book of Common Prayer, ENS), but on July 10 the House of Bishops voted it down and offered in its place an amended resolution (see House of Bishops proposes expanded path for prayer book revision, ENS), which proposed a less expensive and time-consuming process to create alternative liturgical texts without engaging in full Prayer Book revision. This amended resolution then had to go back to the House of Deputies for debate and a vote, which was a source of concern due to the shortness of time. In the end, the House of Deputies did vote to concur with the bishops' amneded resolution (see Deputies agree with bishops on new plan for liturgical and prayer book revision, ENS).

A resolution written by the Rev. Diana Wilcox and Laura Russell, and proposed by the Newark deputation, was adopted by the General Convention on July 11. Titled C060 - Breaking the Episcopal Stained Glass Ceiling and based on the Diocesan Resolution 2018_AC144_02 Breaking The Episcopal Stained Glass Ceiling adopted at the 2018 Annual Diocesan Convention, the resolution states:

Resolved, the House of Deputies concurring, That the 79th General Convention of the Episcopal Church authorize a task force with a membership of twelve members consisting of 3 bishops, 3 priests or deacons and 6 lay persons, including at least two young adults, appointed by the President of the House of Deputies and Presiding Bishop, of which women shall compose at least half of the membership, to research sexism in The Episcopal Church, and the role it plays in pay equity, status, and gender-based harassment. The task force shall report back to the 80th General Convention of the Episcopal Church with a plan to provide materials and resources to combat sexism in the Church; and be it further

Resolved, That the Joint Standing Committee on Program, Budget and Finance consider a budget allocation of $60,000 for the implementation of this resolution.

The number of resolutions to be addressed necessitated the addition of an unscheduled evening legislative session in both houses on July 11. Bishops and Deputies went to work at 7:30 PM and finished at 9:30 PM, less than 12 hours before their next regular legislative session at 9 AM on July 12. Members of the House of Deputies live-tweeted this evening session, sometimes humorously and sometimes seriously, using the hashtag #gcafterdark.

It's a tradition for the Bishop to host a dinner for everyone from the Diocese of Newark who is present at General Convention - both deputies and those with other roles. That dinner was held on July 10, which happened to be the day before the Bishop's birthday. Members of the Newark contingent surprised the Bishop by singing "Happy Birthday" as his dessert was brought out with a candle in it. On July 11, his actual birthday, "Happy Birthday" was sung to him again, this time by the House of Bishops.

In the House of Deputies, each diocese's seats are identified by a post – known as a “standard” – bearing the name of the diocese. It's a General Convention tradition for each deputation to decorate their standard to reflect their local diocesan culture. After some brainstorming, the Newark deputation chose the theme "Garden State." They incorporated gun violence awareness by using orange flowers, and included the New Jersey state bird, the Goldfinch. Episcopal News Service included the Newark standard decorations in their article, A totally subjective top 10 list of House of Deputies diocesan standards. 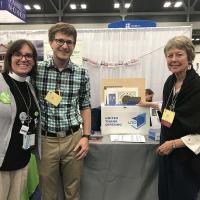 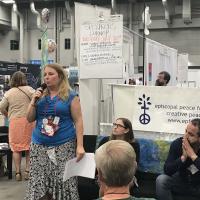 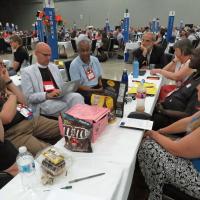 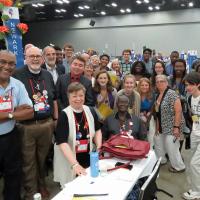 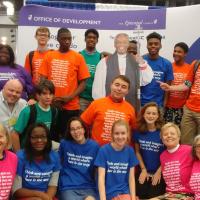 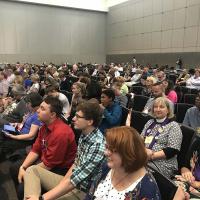 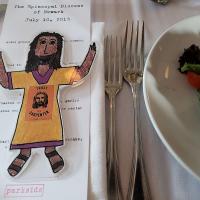 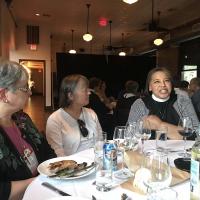 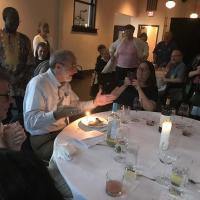 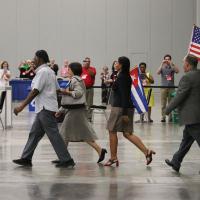 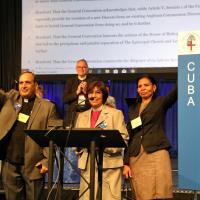 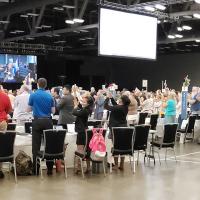 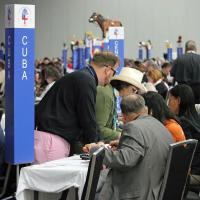 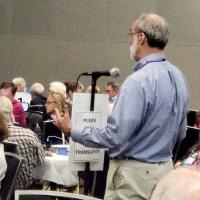 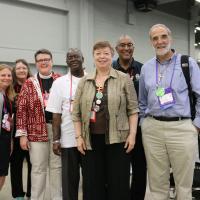 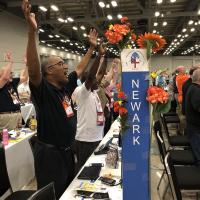 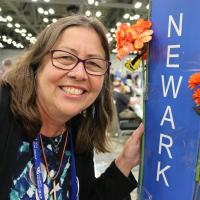 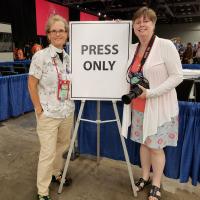 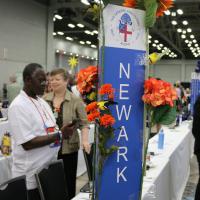 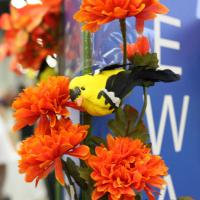