July 16, 2019
By:
Nina Nicholson, Director of Communications
The Rev. Diana Wilcox holds a candle at the Lights for Liberty vigil outside the immigration detention center in Elizabeth. NINA NICHOLSON PHOTO

On Friday evening, July 12, Lights for Liberty: A Vigil to End Human Detention Camps brought thousands of people to detention camps and other sites across the country and the world to protest the inhumane conditions faced by refugees at the southern border of the U.S.

Afterwards, organizers stated there had been more than 800 registered Lights for Liberty vigils on five continents. At least 23 of these vigils were held in New Jersey, many attended, or even hosted, by members of the Diocese of Newark.

St. Paul’s, Paterson hosted a Lights for Liberty vigil that included a service in the church. On the floor in front of the altar was placed a cage containing a small statue of the Holy Family, an image which the Rev. Deacon Erik Soldwedel, Deacon in Residence, said was intended to be disturbing and make people think.“The Holy Family at the birth of Christ is the last image most have of Jesus, Mary and Joseph before fleeing to Egypt,” he said. “When they entered Egypt they were fleeing oppression and murder. If they fled to the USA today, they would be in a cage.”

Soldwedel continued, “We are called as Christians to respect the dignity of all of God's creation and to honor and welcome the stranger. To recognize Jesus in all whom we meet. If we do these things how can we allow the mistreatment of our brothers and sisters on our nation's southern border?”

That is why, he said, when two members came to him to request that their congregation participate, “I was ready and willing to organize an event where we could witness our belief and tell the government to cease their inhumane treatment of immigrants.”

A number of diocesan members from several congregations attended the Lights for Liberty vigil outside the immigration detention center in Elizabeth, familiar to those who volunteer with First Friends of New Jersey and New York.

“This is the third time I have come to this detention center to stand in solidarity with those who are imprisoned within it, because I believe that the gospel of Jesus calls us to stand with the oppressed, and to be a voice for the voiceless,” said the Rev. Diana Wilcox, Rector of Christ Church, Bloomfield/Glen Ridge. “We were there to let the people in the center know they are not forgotten, to let the government know that we will hold them accountable and fight for change, and to support one another in the long and often exhausting journey for justice and peace.”

Organized by a local politician, the Elizabeth vigil had a large secular attendance and featured a “baby Trump” balloon, but diverse faiths were also represented. At sunset, Wilcox and the Rev. Peter De Franco (formerly of this diocese, currently serving in the Diocese of New Jersey) joined Jewish attendees and a Roman Catholic sister of the Felician order for a brief Shabbat service on the sidewalk.

Libby Clarke, a graphic artist who attends Christ Church, Short Hills, made 80 signs that she donated to the vigils in Elizabeth and Newark.

In Morristown, a Lights for Liberty vigil started outside the town hall and then proceeded to Morristown Green, a site of historical importance; George Washington's troops camped there during the winter of 1777.

The Rev. Margaret Otterburn, Rector of Messiah, Chester, said she attended the Morristown vigil because she had been “really shocked and horrified to hear the accounts of the terrible treatment inflicted on children especially at centers on the border.”

“I thought attending this protest rally would offer an opportunity to learn more, to be in solidarity with others who feel the same way and to be another person protesting to those responsible for inflicting such pain on vulnerable children.”

Julie Crawford of Messiah, Chester said she was most touched by a young student who shared a story about a friend who is an immigrant.

“To see our youth so concerned and brought to tears, drives home the reality that this generation of kids carry so much burden in their heart,” said Crawford, who works as a teacher. “We need to make sure they all have opportunities to voice their concerns and to foster hope by our actions and through our prayers. The stress I see in my students daily is an indicator for needed change.”

Among the commemorative statues in Morristown Green is one depicting the meeting of General George Washington and Alexander Hamilton with the Marquis de Lafayette. Crawford turned it into a poignant image by placing her Lights for Liberty poster in Washington’s hands. 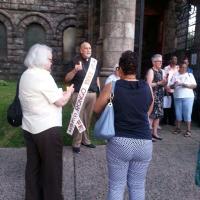 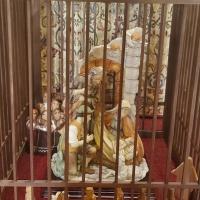 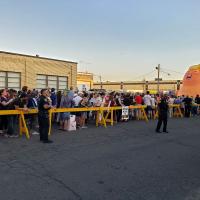 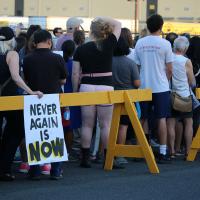 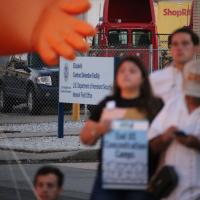 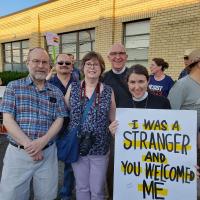 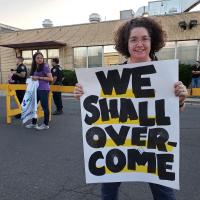 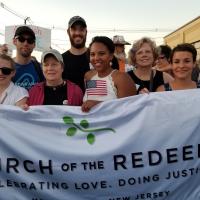 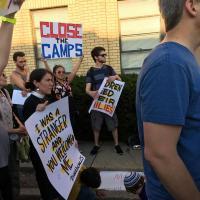 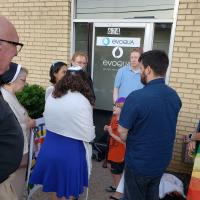 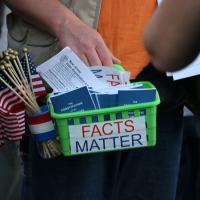 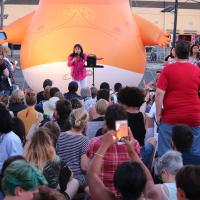 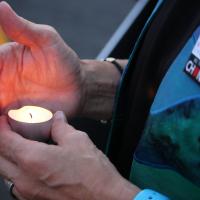 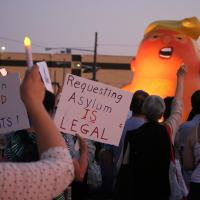 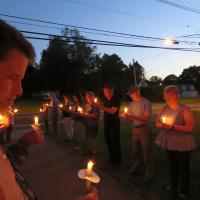 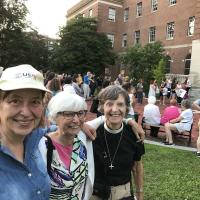 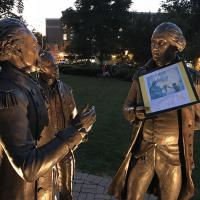