Death in our diocesan family: The Rev. David Marston Gillespie 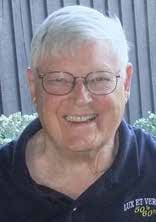 Born in Morristown on March 16, 1925, he was the youngest of five children of Samuel and Margaret Gillespie. He started college at Yale but left to enlist in the army during WWII. It was his experience serving as a commander, shaping young men that lit the fire for him to become an Episcopal priest. He graduated from Yale University in 1951 and Berkeley Divinity School in 1954. In addition to serving St. Paul's, Englewood, his 63 years of ministry included serving as the Dean of Grace Cathedral in San Francisco and parishes in Washington, DC; Skaneateles, NY; and East Greenwich, RI.

In the Diocese of Newark, he also served on the Department of Christian Education, as a General Convention Alternate (1970 and 1973), on the Diocesan Planning Commission on Goals, Objectives & Aims, the Committee on Diocesan Organization, as District Convener for Northeast Bergen District, and multiple terms on Diocesan Council.

The last 25 years of his life, he split his time between homes in Rochester, VT and Tucson, AZ, where he served as affiliate clergy at Saint Philip’s, Tucson and Christ Church, Bethel.

He is survived by his wife of 68 years, Joanna Bowen Gillespie; and his daughter, also an Episcopal priest, the Rev. Ann Gillespie of Vienna, VA. His son, Robert Gillespie, preceded him in death in 2010; Rob’s long-time partner Peg Crane survives. He is also survived by three grandchildren: Devin Gillespie, Spencer Allin and Wesley Allin; one great-grandson, Jackson Gillespie; and by nephews Mike and Ethan Bowen and niece Amanda Bowen.

Good and gracious God, the light of the faithful and shepherd of souls, you sent your servant David to be a priest in your Church to feed your sheep with your word and to guide them by his example; give us the grace to keep the faith he taught and to follow in his footsteps. We entrust him into your unfailing mystery of Love and Hope through Jesus Christ our Lord. Amen.