Any depiction of her life and ministry will inevitably fall short of the reality of the woman one bishop described as having "more energy than ten normal people."

Marge’s passion for work in the Diocese of Newark and The Episcopal Church reaches back to the 1960s. Some of the organizations she helped found include North Porch Women & Infants’ Centers, Anglican Women’s Empowerment, the Women’s Commission and The Oasis LGBTI Ministry. She served as a Lay Deputy representing the Diocese of Newark at 12 General Conventions, and as a Lay Deputy to the Annual Diocesan Convention for more than 40 years.

In an interview in 2009, Marge said, "Most of my ministry has been focused around inclusivity." 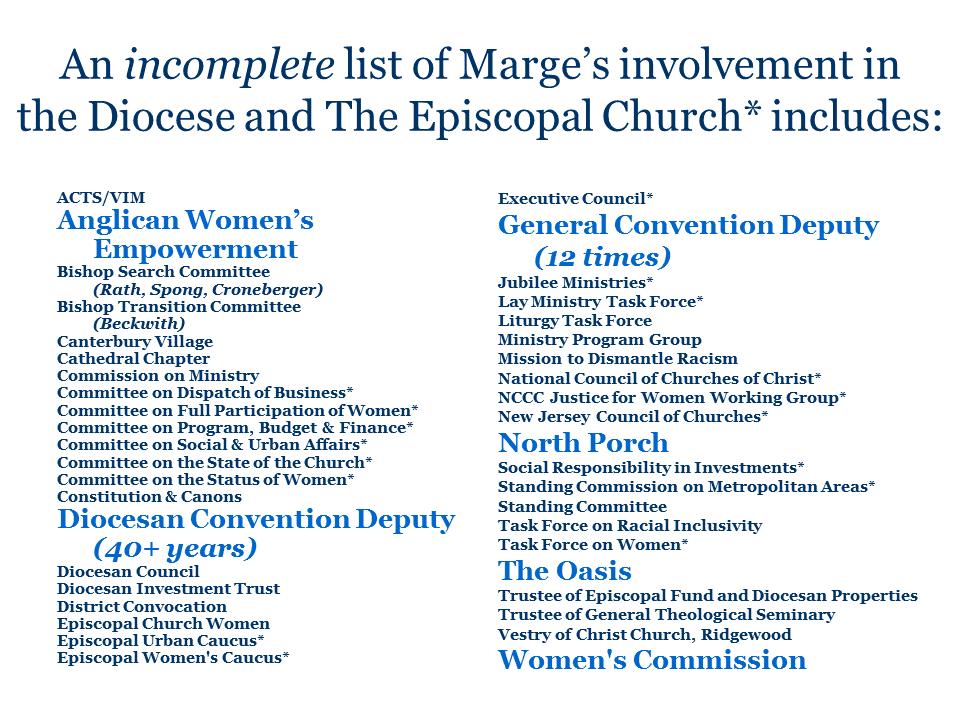 At the 1980 Annual Convention, Bishop Spong recognized Marge's work by naming her one of the first recipients of his award, the Bishop's Cross, noting that she had achieved a "rather amazing influence and power" in the church.

In 2000, The Oasis presented her with their Excellence, Generosity and Gratitude Award, describing her as "a 'diocesan mother' of sorts to many of us here – male and female, gay and straight – in the very best sense of that word."

At the 2010 Annual Convention, Bishop Mark Beckwith announced the Marge Christie Congregational Growth and Vitality Fund as a living testimonial to her decades of "tireless and passionate work" for the Diocese of Newark and The Episcopal Church.

Marge was a leader in the movement for the ordination of women. Then 30 years later, when the House of Bishops elected Katharine Jefferts Schori as Presiding Bishop at the 2006 General Convention, Marge was the Lay Deputy who moved acceptance of the election by the House of Deputies. In the video posted below, recorded in November 2009, she shares her memories of this historic moment.

At the 2011 Annual Convention, when Marge found herself competing against her own grandaughter, Caroline Christie, for the fourth and final Lay Deputy slot to represent the diocese at the 2012 General Convention, Marge withdrew from the election, an emotional moment related in a video composed of still photos and live audio recordings.

Marge's family is planning a public memorial service for late May or early June. More information will be announced as it becomes available.

God, our Father, we thank you that you have made each of us in your own image, and given us gifts and talents with which to serve you. We thank you for Marge, the time we shared with her, the good we saw in her, the love we received from her. Now give us strength and courage, to leave her in your care, confident in your promise of eternal life through Jesus Christ our Lord. Amen.