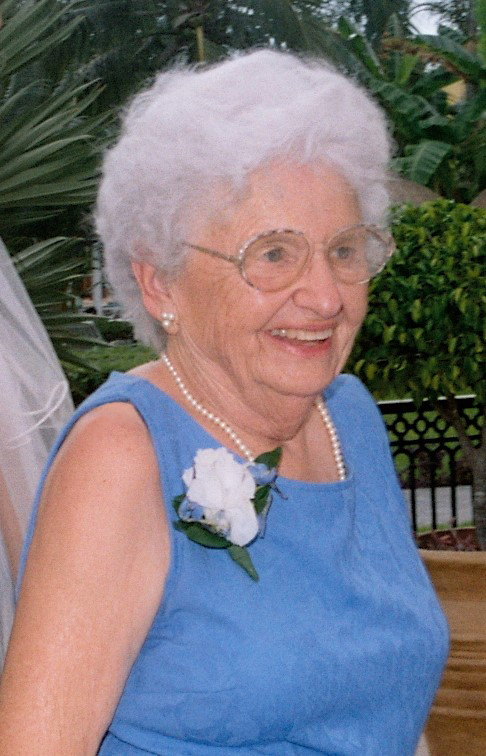 With sadness we share the news of the death of Catherine Weadon Saucedo, 91, on April 26, 2019. She was the mother of the Rev. Susan Saucedo Sica, who serves as Vicar of St. Gregory’s, Parsippany.

Born on December 16, 1927 in Alexandria, VA, Catherine was raised in the shadow of the Masonic Temple and was a faithful member of the Del Ray Methodist Church. Her father, William, was a printer and mother, Lucille, a homemaker. A child of the Depression, she and her siblings were sent to southern Virginia during the summers to pick tobacco. She was valedictorian of her high school graduating class of 1945. During War II, she and her sister served in the “Government Girls,” the clerical corps that kept federal agencies in Washington, D.C. working.

While working in D.C., she was set up on a blind date with a seminarian from Mexico studying at the Virginia Theological Seminary. The story goes that he asked her for a second date because, “she didn’t make fun of [his] English.” Catherine and Melchor Saucedo were married in 1946 at St. Paul’s Church, Alexandria, a marriage that would last 68 years.

At age 19, even though Catherine couldn’t speak Spanish, they moved to Mexico, where they settled in the outskirts of Guadalajara. The placid life she imagined as a pastor’s wife in Virginia was totally different in rural Mexico. Over the years, the church was blessed by the tireless work of a two-for-one missionary couple: he preached while she played the organ. This pattern would repeat itself throughout their life together. In 1953 the family returned to the United States as the Rev. Saucedo accepted a “reverse missionary” and led Santa Fe Mission in San Antonio, Texas. In 1963, a call to serve as Dean of the seminary led them to Mexico City, where in addition to raising her family, Catherine helped run the seminary refectory. In 1968, the Rev. Saucedo was elevated to Bishop of the Diocese of Western Mexico and they moved back to Guadalajara.

As a bishop’s spouse, Catherine helped organize and promote the work of the church including the establishment of several missions in the diocese, and she “held the fort” while Bishop Saucedo traveled extensively on behalf of the diocese, Province IX and the Episcopal Church. After so many years of living in Mexico, Catherine became fluent in Spanish and began serving as translator at many meetings, and attended General Convention as a deputy several times.

Upon Bishop Saucedo’s retirement, Catherine took on more responsibilities in the wider Episcopal Church, serving on Executive Council and on the Program, Budget and Finance Committee. For several years the Saucedos traveled to the Diocese of Newark as part of their visiting Bishop’s program established by Bishop Jack Spong. After Mexico became an independent church in the Anglican Communion, Catherine served on the commission that created the Himnario de la Iglesia Anglicana de Mexico, 1998. Most recently, she was a member of the vestry at St. Andrew’s Church Lakeside, Chapala, in Mexico.

Memorial services will be held in Mexico.

Condolences may be sent to the Rev. Susan Saucedo Sica at 30 Reynolds Ave., Parsippany, NJ 07054.

Lord, for your faithful people life is changed, not ended. When the body of our earthly dwelling lies in death we gain an everlasting dwelling place in heaven. Lord, grant eternal rest, forever in the radiance of your light. Amen.