Several Diocese of Newark congregations took Good Friday observances to the streets, many of them ecumenical efforts with neighboring churches.

In Lincoln Park, Good Shepherd Episcopal Church of Lincoln Park & Montville upheld a tradition that's at least 15 years old by joining with the First Reformed Church and Saint Joseph's Roman Catholic Church for a "Walk of Faith." Starting with a noon service at the First Reformed Church, 62 walkers processed to St. Joseph's for a second service, then to Good Shepherd and back to the Reformed Church for a closing service presented by the women of the three congregations. All the services were simple, with homilies centered around the theme of fear and the role it played in the passion narrative. At the closing service, the women of the three congregations prayed for the needs of the world and then laid the prayers, written on pieces of paper, at the foot of the cross. (Photo at right.)

In Newark, Trinity & St. Philip's Cathedral, House of Prayer and Grace Church joined with Goodwill Rescue Mission, North Reformed Church, First Baptist Peddie Memorial Church, First Presbyterian Church, St. John's Roman Catholic Church and St. Michael's Medical Center for a “The Way of the Cross” walk. Beginning at the First Presbyterian Church – which, along with the city of Newark, is celebrating its 350th anniversary – 75 or more pilgrims continued on to Military Park, the PSEG Plaza, St. John's soup kitchen, Gateway Center IV and the courtyard of First Presbyterian. At each stop, a reflection was given on one of “Jesus’ Seven Last Words” from the cross accompanied by singing and prayer with and for our neighbors. The walk culminated with the “Last Word” in the sanctuary and was followed by a sharing of a light lunch. (Photos in gallery below.)

In Jersey City, Church of the Incarnation, St. Paul's Church in Bergen and Grace Church Van Vorst joined with 10 other congregations for their third annual Stations of the Cross, during which approximately 100 worshippers visited 14 sites of violent crimes. Go to the photo gallery and article, plus media coverage.

Church of the Redeemer, Morristown creates and walks an annual "Stations of Morristown," a Stations of the Cross that includes local places of ministry, pain and sometimes even violence. This year the majority of the stations were places to which Redeemer has ministry connections   the offices of the Probate Court's Workforce Redevelopment Program, the Market Street Mission and the home of Our Promise, among others. The last stop on the walk this year was in front of the Redeemer Parish House, where 75 years ago the first AA meeting to be held in a church in the state of New Jersey began. It was the third official meeting of Alcoholics Anonymous in NJ, and has been meeting continuously at Redeemer ever since. (Photos in gallery below.) 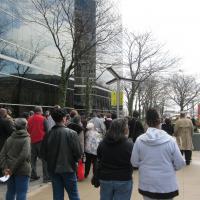 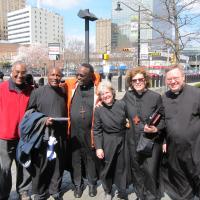 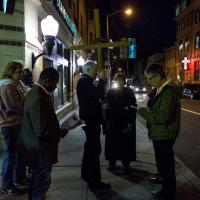 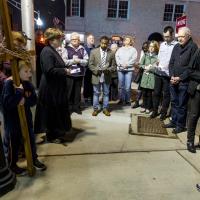