Celebrating the Consecration of an Episcopal Bishop

When the Rev. Carlye J. Hughes is consecrated as the 11th Episcopal Bishop of Newark on September 22, she will join a line of apostolic succession that tradition holds is unbroken since the earliest days of the Christian church.

She will kneel on the stage at the New Jersey Performing Arts Center, and more than 20 bishops will directly or indirectly lay their hands on her, in accordance with ancient tradition. She will be charged in prayer with “wisely overseeing the life and work of the Church.”

Having knelt as a bishop-elect, she will rise as the Rt. Rev. Carlye J. Hughes, the 1,109th bishop of the Episcopal Church, and the first woman and first African-American to serve as Bishop of Newark.

Then the service will continue as a festive celebration, with music led by a choir of more than 200 in English, Spanish and Korean, which are languages spoken in churches in the diocese. There will be a mix of traditional and Gospel music, accented by a brass quintet, a jazz pianist, African drums and bagpipes, as well as the traditional organ.

The entire Diocese of Newark is invited to be a part of this momentous celebration, which is why a venue the size of NJPAC was selected. Admission is free, but advance ticketing is required.

The Episcopal Church is headed by its bishops, rather than by a single authority such as a pope. Indeed, the word “episcopal” means “of or pertaining to bishops.” In the Episcopal Church, bishops are elected, not appointed.

The chief consecrator will be the Most Rev. Michael B. Curry, Presiding Bishop of the Episcopal Church, who was elected to that office in 2015 for a single nine-year term. He caught the world’s attention when he preached at the wedding of Prince Harry and Meghan Markle on May 19 – just a few hours before Hughes was elected on the first ballot. 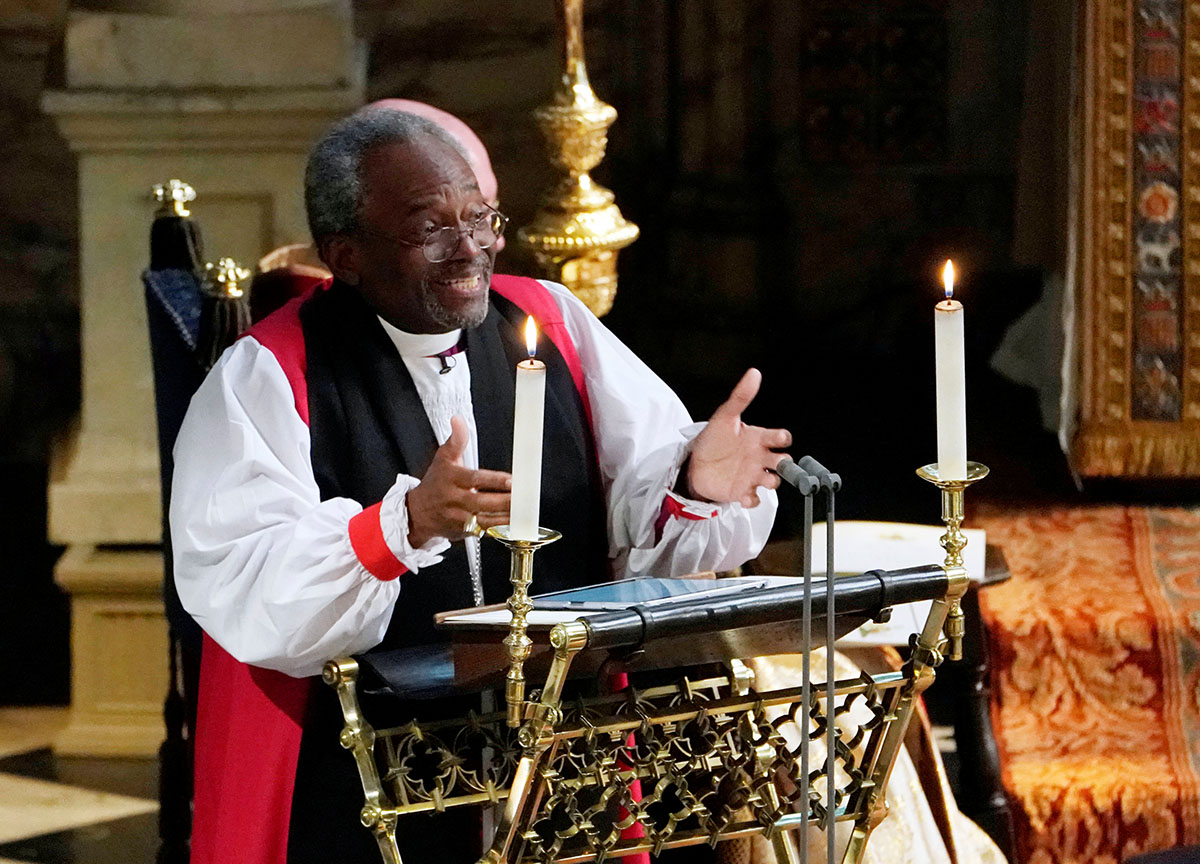 Episcopal Church Presiding Bishop Michael Curry gives an address during the wedding of
Prince Harry and Meghan Markle in St. George's Chapel at Windsor Castle in Windsor, Britain,
May 19, 2018. Owen Humphreys/Pool via REUTERS

Among the co-consecrating bishops will be the Rt. Rev. Mark M. Beckwith, who has served as 10th Bishop of Newark since January 2007; the Rt. Rev. Barbara C. Harris, retired Bishop Suffragan of Massachusetts and the first female Episcopal bishop; the Rt. Rev. Jennifer Baskerville-Burrows, Bishop of Indianapolis; the Rt. Rev. J. Scott Mayer, Provisional Bishop of Fort Worth, where Hughes served as the Rector of Trinity Church before her election; and the Rt. Rev. Dr. DeDe Duncan-Probe, Bishop of Central New York, who like Hughes also came from the Diocese of Fort Worth.

(Therein lies a brief story. A decade ago, the Diocese of Fort Worth was one of the most conservative Episcopal dioceses in the country. The bishop and a majority of the churches voted to leave the Episcopal Church after the 2006 election of a woman, the Rt. Rev. Katharine Jefferts Schori, as Presiding Bishop. Now the continuing Episcopal Diocese of Fort Worth has raised up an African-American woman to lead in Newark, which is considered one of the most liberal dioceses in the country. The schismatic Forth Worth diocese, now part of the Anglican Church in North America, does not ordain women as priests, let alone as bishops.)

Also serving as co-consecrators at NJPAC will be the Rev. Erik K. J. Gronberg, PhD, a bishop in the Lutheran Church and a former clergy colleague of Hughes in Fort Worth, and the Rt. Rev. M. Blair Couch, a bishop in the Moravian Church. Both denominations are in full communion with the Episcopal Church.

As part of the Consecration ceremony the new bishop will be presented with symbols of her office. The new liturgical garments in which she will be vested will include a miter, the ceremonial headwear of bishops. The transition of diocesan leadership will be symbolized by Bishop Beckwith handing her the bishop’s crozier, a stylized shepherd’s staff that evokes the role of Christ as the Good Shepherd.

The Consecration ceremony always includes a Service of Holy Eucharist, at which the new bishop will preside. Hughes has selected her friend and mentor the Rev. Brenda Husson, Rector of St. James’ Church in Manhattan – the first church Hughes served – to give the sermon.

The first Bishop of the Episcopal Church, which split from the Church of England at the time of the American Revolution, was the Rt. Rev. Samuel Seabury. He was consecrated in 1784 by three bishops of the Scottish Episcopal Church.