More than 2,000 asylum seekers and immigrants are being detained in jails and correction centers in northern New Jersey. Many of them are alone and without support, knowing no one in this country, and able to communicate with their families back home only with great difficulty. St. George’s Church in Maplewood has begun partnering with the non-profit organization First Friends of NJ and NY, a 2015 Alleluia Fund grant recipient, to support these detainees through a variety of services.

Nancy Taiani, a member of First Friends’ Board of Trustees, vividly describes detainees’ experience: “Asylum seekers come here for many reasons. They might be teens from Honduras, given two ugly choices: join a gang, or leave everyone they love and risk their lives to cross the border into the United States. People from religious or ethnic minorities in other lands may face persecution and the real threat of death. When they arrive in America asking for asylum, they are met at the border or airport, handcuffed and shackled and put into detention, compounding their trauma and denying their human dignity.” In addition to asylum seekers, undocumented immigrants are also held in detention, helping to fill the 34,000 beds nation-wide budgeted by Congress.

Once in detention, Taiani says, “Non-citizens and asylum seekers are denied the rights granted to jailed criminals. They sleep in open dormitories where they often have difficulty communicating with those with whom they share this living space. Many know no one in this country, and are required to pay high fees for phone calls and stamps to communicate with their families. Without the right to an assigned lawyer, they are expected to prove to a judge the threat of danger that they fled – and those hearings are backlogged.”

The group’s mission statement explains its calling: "First Friends of NJ and NY upholds the inherent dignity and humanity of detained immigrants and asylum seekers. We provide compassion and hope through volunteer visitation, resettlement assistance and advocacy."

First Friends volunteers visit the detainees, listen to their stories, share tears and smiles, and advocate for their welfare in detention. They recognize their dignity and humanity, and bring encouragement and hope. “After the trauma of being incarcerated and treated as a number,” Taiani says, “detainees come to look forward to visits from their new friends.”

Through their "Stamp Out Despair" program, First Friends distributes phone cards, writing materials and stamps so that detainees can communicate with their families.

First Friends also offers resettlement assistance. When a detainee is finally released, either by being granted asylum or released on bond, often it's without weather-appropriate clothing or a means of transportation. A First Friends volunteer will meet the person with a jacket and a ride, and sometimes even find them a place to stay.

The Rev. Deacon Ken Boccino of St. George’s, Maplewood also serves on First Friends’ Board of Trustees. He says, “First Friends is the only organization that has established a visitor’s program for detainees as well as providing post-release support for those granted asylum.”

In May 2016 a team from First Friends, including recently released detainees, gave a presentation at St. George’s. Inspired by their stories, St. George’s congregation has participated in a collection of furniture, clothing and household items for two Nigerian families reunited with their fathers who were recently released from detention. The church is currently collecting writing materials for First Friends’ “Stamp Out Despair” project. Several members have inquired about becoming volunteer visitors or short-term hosts, so Boccino and the Rev. Bernie Poppe, St. George’s Rector, are exploring the possibility of inviting First Friends to conduct a training program. They are also looking into inviting other congregations in Maplewood and South Orange to join them.

Poppe was moved by the presentation to offer to host asylum seekers himself. Since the beginning of July he has hosted Paulos, a university math professor from Ethiopia who, after declining to affiliate with the ruling regime for political reasons, was imprisoned and beaten for six months. Upon his release Paulos, anticipating the intimidation would continue, hired an agency that promised him safe passage to America. Instead, he endured an arduous and dangerous journey.

At the U.S. border in Mexico Paulos presented himself as a political asylum seeker and was placed in a series of detention centers in Texas and New Jersey for the next eight months. While at the Elizabeth Detention Center he became acquainted with First Friends, which guided him in navigating the system and supported him upon release, ultimately placing him with Poppe while he waited for his work permit and social security card.

Poppe says, “I’m happy to host him since I’m learning a lot and it’s nice to have his company. And he’s an excellent cook – it’s a win/win situation!”

After coming to Maplewood, Paulos volunteered as a math tutor at Seton Hall University in South Orange. Now with his work permit in hand, he hopes to continue in that profession.

Poppe also briefly hosted Hassan and Jama, both young Muslims from Somalia, who each stayed with him and Paulos for a few days until they could connect with people they knew in the U.S. who would host them for the long term. Since they could only eat Halal meat, he helped them find Halal butchers in Plainfield and East Orange. “I enjoyed watching the ceremonious way Hassan and the Halal butcher in Plainfield, who is from Syria, greeted each other and conducted business,” he says. The Plainfield excursion included a visit to an international spice store in Westfield, so that Paulos could find familiar spices. 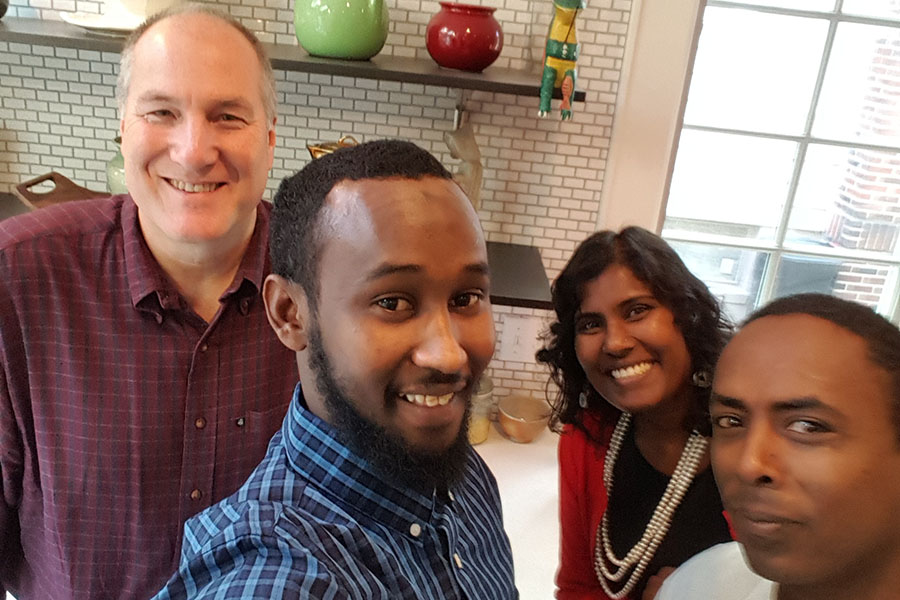 The Rev. Bernie Poppe in the Rectory kitchen with (l-r) Jama, Sally Pillay of First Friends, and Paulos.

Noting that without First Friends, his guests’ stories might have had a very different ending, Poppe says, “I've been really moved by the horrendous stories each tells of their travels here and how they still maintain a youthful innocence and joy at being safe and cared for.”

Boccino reports that First Friends’ 2015 grant from the Alleluia Fund has not only helped provide the logistical and moral support necessary for newly released asylum seekers, it has also supported their efforts to reach out for volunteers and donations to congregations in a wide range of faith communities in northern and central New Jersey. First Friends has submitted another Alleluia Fund grant request for 2016.

For First Friends of NJ & NY and their supporters, the Gospel message of Matthew 25:35-36 is very much alive: