April 27, 2020
By:
The Rev. Sharon Sheridan Hausman
A set of stained glass windows by Colleen Hintz.

As the COVID-19 pandemic has forced people across the world to shelter in place, many have turned to the arts for entertainment, solace and inspiration. The VOICE Online is profiling some of the many artists in the Diocese of Newark and sharing examples of their talents. This week’s article features artists working in three different media.

The first time Colleen Hintz took a class on creating with stained glass, she emerged with bloody hands and instructions to bring her own box of Band-Aids. “I was basically in tears.”

But, she’d paid for a six-week class, and she persevered. “By the time it was over, I made my first piece.”

Clergy and churches throughout the Episcopal Church and beyond routinely display Hintz’s cloth handiwork in liturgical vestments from her business Fruit of the Vine (www.fruitofthevine.us). Hintz’s successive homes in Sparta and Randolph and now the state of Virginia have displayed her stained-glass artistry.

In April, Hintz finished three windows for the family room in her house. “I call them part of my COVID blessings, to have the time to make them,” she said.

Hintz reworked the new, square windows from transom windows she created for a previous house. Wisteria vines wind across a background of clear glass, visited by multi-colored birds from a swooping swallow to a cardinal perched on a vine to a hummingbird sipping flower nectar. They continue the wisteria theme – inspired by the work of stained-glass artist Louis Tiffany – in three large windows that will be installed above. The flowers are so lifelike, they once attracted a real bird. "I heard this tap, tap, and it was a hummingbird at the glass... trying to feed at the wisteria.”

One of the lower windows features a flowering crabapple with purple iris at its base – “what I refer to as my Dad Memorial Window,” Hintz said. Much of her glasswork depicts nature scenes, inspired by both Tiffany and her father.

“I made my copy of the Tiffany grape arbor that is up over my fireplace,” she said. “I’ve always admired his work, so I’ll use those as a starting point.”

Her spiritual connection to nature comes from her father.

“Dad and I would fish together all the time,” she recalled. “Dad always fished from dusk until dawn because that was the best time to be on the stream, and you couldn’t speak because you didn’t want to disturb anything. I guess in many ways it was an intensely spiritual experience for me.”

In both stained glass and vestments, she appreciates “being able to create the beauty that surrounds us and that he was able to name,” she said. “All the flowers and everything I use... those were all things my dad taught me about: the awe and wonder of creation; those ‘aha’ moments in life.... I like to be surrounded by it. And now I don’t need my first box of Band-Aids.”

“I’ve always loved art,” said Kathie Maglio. “I can draw anything. I do cards all the time for my grandkids. I do cartoons. I can knit. I can paint.”

But at Church of the Saviour, she may be best known for her pottery. Since retiring in 2010 from teaching art in the Randolph school district, she’s found a new set of students as a volunteer for the Vision Loss Alliance, which meets at the church. She teaches blind and visually impaired adults ages 21 to 90 to create clay artwork.

“It’s good for them,” she said. “It’s such a social thing, but they do some really good things.” Students create banks, vases, hearts, small animals (including doves and Easter bunnies), Christmas ornaments and crosses. One woman made a Corvette for her husband. Another student makes plaques as thank-you gifts.

“I just feel everybody can do art,” Maglio said. “It’s not about making a straight line, ’cause I can’t!”

When classes first start, students pass around pottery items they or others have made to get ideas. Volunteers assist where needed, such as with lettering and detail work, but students do as much of the artwork as possible.

One challenge is that, “if you’re born blind, you don’t know color,” Maglio said. “They don’t know what color to paint their work. I’ll say, ‘Green is what the grass is.’ ... It’s hard to describe a color unless you can relate to something they kind of know. It’s just a learning experience for me.”

The latest 13-week class is on hiatus due to New Jersey’s COVID-19 pandemic shutdown. Under ordinary circumstances, Maglio fires clay works-in-progress every other week in a kiln at her house. “It takes more than eight hours.”

Each piece requires two firings to complete: one after the clay is shaped, one after its final glazing. “Anything we work on and fire and finish, we pass around for them to feel. They know what everybody’s working on.”

“I love three-dimensional [art],” Maglio said. She wrote a master’s paper on the history of dragons in the world, from China to Norway, and then created clay dragons in different environments. “I did an emperor’s dragon. I did a dragon in a swamp. I did a three-headed dragon. I did little eggs with little dragons coming out. I did a whole series for that class, even though I was really majoring in painting.”

She continued the reptilian theme at home, using her daughter’s pet as a model for a clay iguana on a branch.

When her daughter married, she created 150 clay birds as party favors for the guests. During her current downtime from teaching, “I’m making 25 little birds, so when I go back in September I can give each volunteer and each student a little bird,” she said. “So far I have 17 birds made, all ready for firing.”

Working with clay “calms me,” she said. “It’s almost like a meditation. Clay is a therapy. Art is a therapy.” While focusing on creating art, “you don’t worry about things that are happening in your life or around you.”

Woodworker Chris Martin specializes in resurrection. She loves to take old items and refurbish them – or give them new life as something entirely different.

“I just love old stuff, and I hate when people send something old out when it [just] needs to be fixed and paid some attention,” she said.

Once, someone gave her a 1970s wagon wheel lamp. “I had it down in the shop for probably two or three years, and that’s when I started getting into salvaging clocks,” she recounted. One day, she walked past it and realized: “It had 12 spokes. I said, ‘That’s it! It’s a clock!’”

She’s since fashioned clocks on items like sawblades and a hubcap. “I have an orphanage here for old clocks,” she said. “It has to look cool to me. It’s not like I take any clock; it has to entice me.”

She collects windows, too. That started when a client brought her a window from their grandmother’s house. Martin suggested: “Why don’t we paint it black, and we put a mirror in there?”

People started bringing her old windows. Soon, she was refurbishing them as frames for art prints. That started after she visited a Habitat for Humanity ReStore. “All of a sudden, I’m looking at this picture. It’s of this old stone house at night in the full moon. The shadows that you got from the moon – it was just so cool.... I went back a week later, and it was gone.”

But the picture made such an impression, she went online, tracked down the artist, Ray Hendershot, and bought the print.

Martin followed a circuitous career path before opening her current business, Woodworking Wonders. She took a shop class her senior year in high school – the first year such classes opened to female students – and “I thought it was really cool.” But after graduating in 1974, she studied history and biology at Montclair State College and fulfilled a childhood dream of becoming a park ranger.

Then she owned a pet shop for 21 years, using her carpentry skills when needed at the store and creating things for fun at home.

Woodworking and home repairs emerged as a new business after she closed the shop. She especially loves working on historic structures. An owner planning to sell an 1880 house will call her to do work on it. She’ll think: “How can I fix that, make it functional for the new people and make it look good?”

“Those are really cool projects,” she said.

She thinks some of her love of “old stuff” stems from being raised by her grandmother, born in 1883. “It’s like I was raised by somebody from two generations before. My grandfather, he was an actual artist who worked for McGraw Hill.”

Woodworking is “very meditative,” she said. “You’re concentrating on what you’re doing.... This is definitely my thing.”

Her craft is interwoven with her spirituality. “To me, it’s a God-given talent that I’m using,” she said. “Some things are simple, but some things... when I get it done, I’m like, ‘Wow,” and I say, ‘Thank you, God.’”

She also summons the wisdom of her forebears. “I tend to ‘draw in’ people that I have lost,” she said. When she needs to draw a straight line, for example, she’ll think of her grandfather, saying, “‘Help me do this line.’ What comes back is, ‘Just take a breath and let it out and go.”

Similarly, “my grandmother that raised me, I invite her in when I’m cooking and thinking about her.

“I wouldn’t be here without those people, so I try to let them live on with me.” 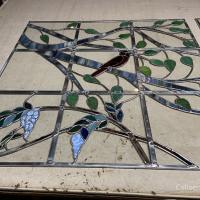 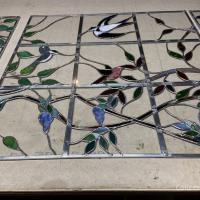 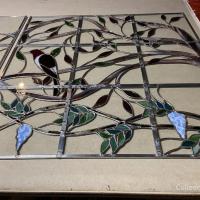 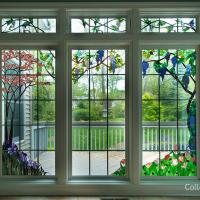 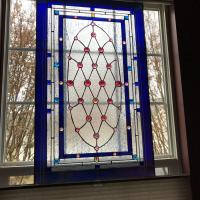 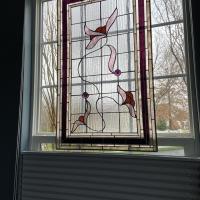 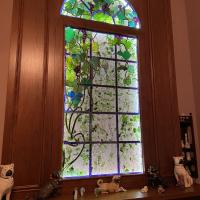 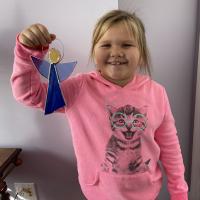 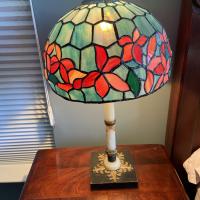 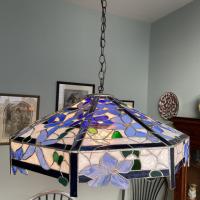 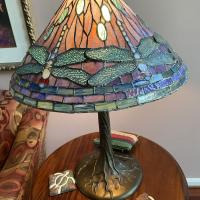 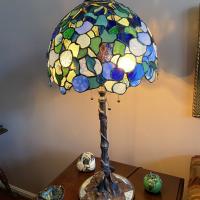 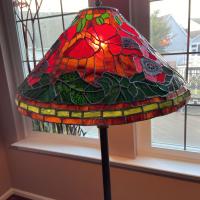 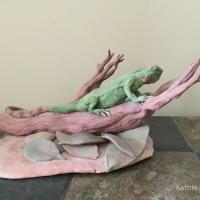 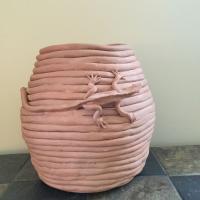 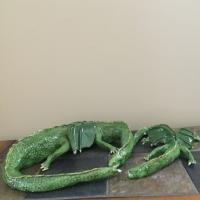 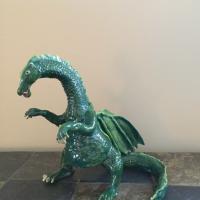 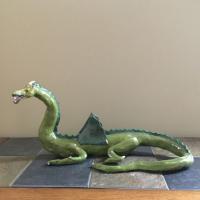 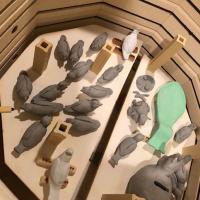 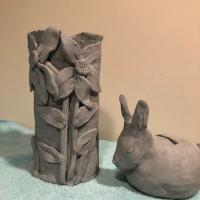 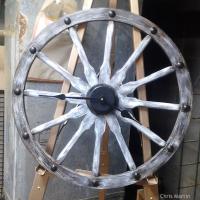 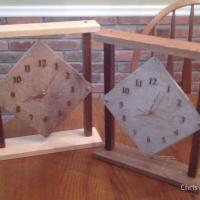 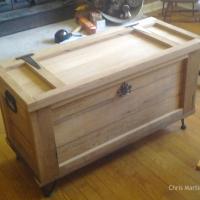 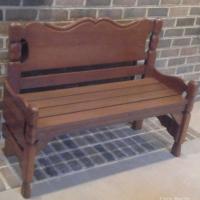 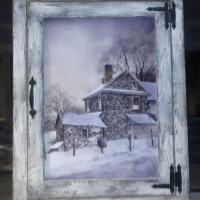 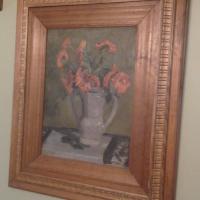