November 08, 2022
By:
The Rev. Sharon Sheridan Hausman
The training search begins with the trainee smelling outside the church door. SHARON SHERIDAN HAUSMAN PHOTO

Bowie, a black Giant Schnauzer, moved from pew to pew, sometimes jumping on the seats like an excited toddler. Suddenly, he took a good sniff at a pew book rack and sat down. Owner Chris Kline quickly rewarded Bowie with a snack.

Bowie was just having fun, but the game was more serious for his owner and their trainer Carmelo Vinci. Dog and owner were completing training as an explosives-detection team. On a recent Friday afternoon, Vinci hid three pseudo-explosives – inert compounds that smelled like dynamite, a fertilizer bomb and RDX – in St. John’s Church in Boonton. Then Kline guided Bowie in a search pattern in the church to locate them.

Bowie completed his mission, and Kline received a training certificate from Vinci, who provides dog training, including scent detection, through his business Roman Empire K9 Academy. In his primary job at a North Jersey sheriff’s department, Vinci works with and trains law-enforcement dogs to track people and to sniff out substances like explosives and narcotics.

“Schnauzers are working dogs,” said Kline, owner of Boonton Auto Parts. With his children grown and out of the house, Kline thought: “Let me make [Bowie] work to keep him busy, keep his mind active.”

The dog-and-human team trained in various venues. When Vinci asked Kline to find a house of worship to practice in, Kline contacted the priest at St. John’s because she had blessed Bowie during a blessing of the animals at the annual Boonton Day festival on Sept. 25.

Bowie completed a 16-week class to imprint odors such as dynamite. Through training, dogs learn that something good will happen if they locate certain scents, Vinci explained.

“Ultimately, for them it’s a game,” he said. Bowie’s reward for winning the “game” of sniffing out the scent of explosives is food. Vinci’s dog at the sheriff’s department earns the chance to play with a ball.

Dogs can sniff out microscopic odors too faint for humans to smell – detecting scents such as explosives or narcotics, even in sealed containers – because a dog’s nose has 200 million olfactory receptors, compared to a human’s 20 million, Vinci said. “They communicate with their nose. Their nose can dissect odors.”

For example, he said, “We see a pizza pie as a whole. The dog, if it was able to speak, would break it down: ‘I smell pepperoni. I smell cheese. I smell oregano.’”

Outside St. John’s, Kline directed Bowie first to sniff the lower edges of the front door. Then, he carefully opened the door and brought Bowie inside, trying to keep the airflow as low as possible so as not to displace any scents. They searched starting at the back of the church, so that they easily could head for the door if they detected an explosive.

In a real-life situation, such as when dogs are called in to “sweep” a building where there’s been a bomb threat, dogs and handlers leave as soon as they detect an explosive and let the bomb squad take over. Once a potential bomb is located, their job is done, Vinci said.

Looking ahead, Kline said he’d like to do more training and gain more confidence – perhaps do some explosive-detection work or even dog training himself when he retires.

As for Bowie, he seems amenable to staying in the game, as long as the treats keep coming. 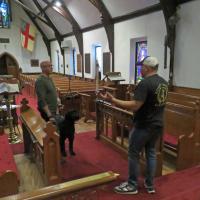 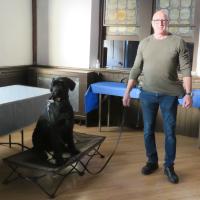 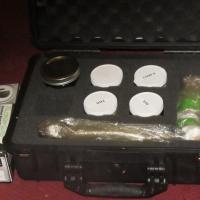 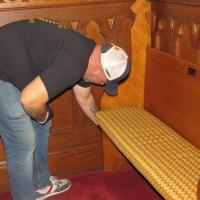 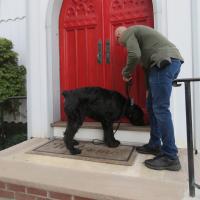 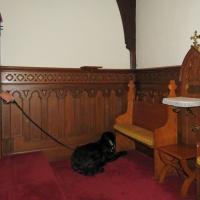 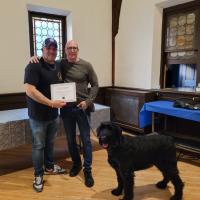