Sending messages around the world is commonplace in the age of email – but schoolgirls in rural Afghanistan don’t have ready access to email. Fortunately, they have Carola Walton. (Although she could use some help – more about that later.)

There are two letter exchanges each year – and it involves much more work and expense than sending an email. Letters must be translated to and from Dari, the more common of the two official languages of Afghanistan. Then a local man flies with them from Kabul to Bamiyan, because the Taliban controls the highways. When the Taliban controlled most of the country, they banned education for females older than 8, and punished non-compliance with beatings and sometimes executions.

“The project provides a chance for social change both in Afghanistan, where educated women make a difference to their families and communities, and in America by developing in young women an awareness of issues of culture, religion and social justice and by empowering them to act in the world,” Walton wrote in her application to the 2019 Alleluia Fund. Participating girls in both Afghanistan and America get a glimpse into a world very different from their day-to-day existence. 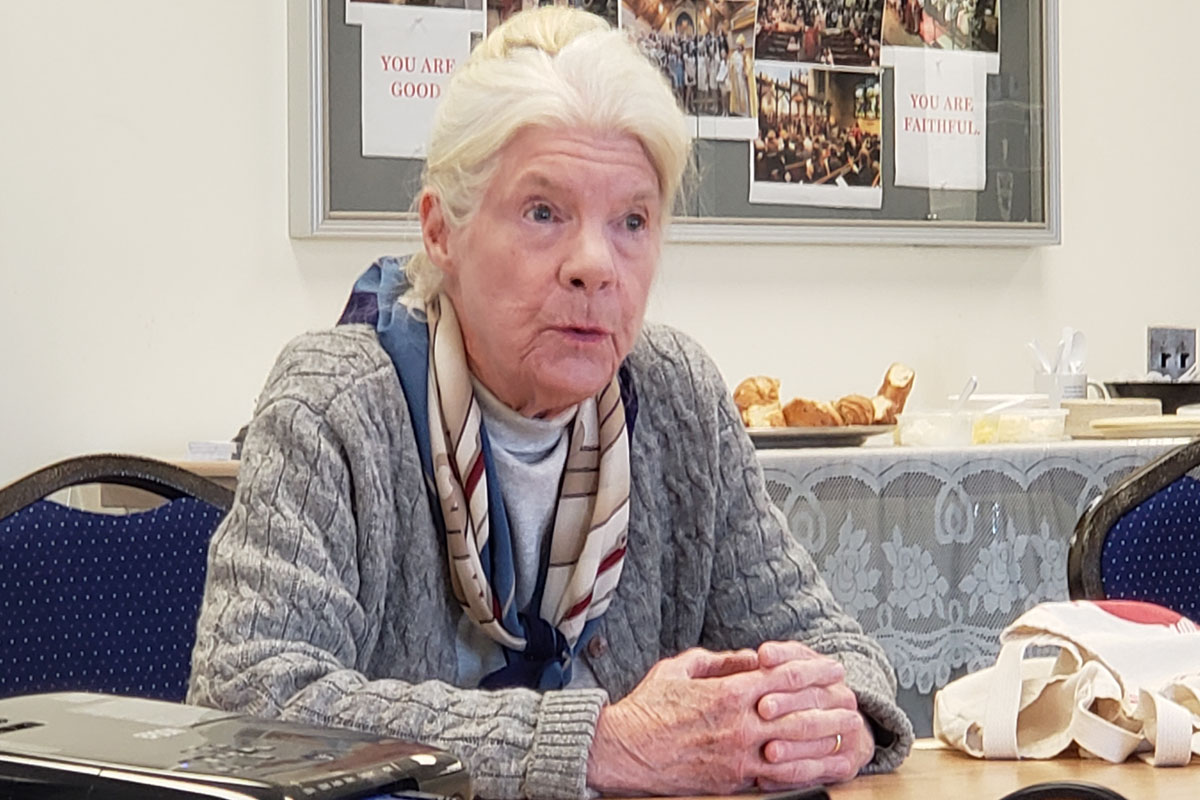 Walton started the project in 2002 as a school-building effort. The Taliban had been largely defeated, at least temporarily, and “I’d been watching TV, and watching all these pictures of Afghan children returning to school, but in truth there weren’t intact schools for them to return to,” she said.

She contacted the American Friends Services Committee (AFSC), a Quaker organization that works for social change around the world. They were working to build schools in Afghanistan, and Walton worked with her church and others in the diocese to raise money for a school.

They raised $8,000, which helped fund construction of the Yakawlang school for girls. When girls first started attending classes in 2004, “a few of them wrote to us,” she said. “Their messages were things like, ‘my father was killed by the Taliban.’”

Walton began working with a handful of girls at St. Luke’s to write letters in return. The program grew steadily, and now sources its American writers from other churches in the diocese – Church of the Messiah, Chester; Grace, Nutley; and St. James, Upper Montclair. She also recruits girls from two private schools, Blair Academy in Blairstown and Kent Place School in Summit.

“In 2019 we have had more girls participating in the project than ever before,” Walton said. In the spring, 183 letters were sent to be translated and delivered to the school, followed by 185 letters from the Afghan girls to their pen pals here.

Eventually the AFSC “decided they weren’t going to be a presence in Afghanistan anymore, [and] it looked like the thing would collapse,” she said. But the local Afghan workers reorganized as a new NGO (nongovernmental organization) called the Afghan Friendship & Cooperation Organization.

Afghanistan is still a dangerous country, but conditions have gotten a lot better since the early days of the project, and the letters are much less grim. Walton said some of the Afghan girls have talked about reading the Harry Potter books, and otherwise have found some common ground with their American counterparts.

Here are some excerpts from letters girls sent more recently:

From Arina: Thank you so much for the letter and gift. The weather is cold. We are taking our exams. We live in a village that is made of mud and stone and people have cows and sheep. We are living far away from Kabul.

From Sidiqa: I am so happy to get your letter and thank you for your gift. My favorite animal is a horse and I play football. My favorite foods are potato chips and steak. In my free time I study books and watch TV.

From Nazgul: I want to study to be a journalist in the future. But I cannot reach my future because my country is so insecure.

The project has also raised money for things like repairing school furniture and an after-school English class. “More of the girls have been writing their letters in English, sometimes not so well, but as the principal notes, they will improve!” Walton said.

On the American side, Walton has worked to provide educational aspects to the program, such as local talks from Afghan people and screenings of movies about Afghanistan.

Walton had been working with a committee from St. Luke & St. Mary. But other people have drifted away, and at the age of 81 she is managing all aspects of the program herself. She hopes to identify one or more people to serve as a partner and eventual successor, to keep the program alive.

“I would welcome anything from just somebody to help me with the nitty-gritty of things, like going through the letters and sorting them out, helping to plan for educational things, to somebody who would like to take over the project,” she said. “Any help would be really welcome.”

To find out more about volunteering with the Afghan School Project, email Carola Walton at gw1@nyu.edu.