The pandemic has been a time for learning new skills and starting new projects. Mark Wright decided to teach himself how to rebuild his church’s beleaguered pipe organ.

“The lowest of the three keyboards is completely dead – don’t use it. Don’t push those couplers. Avoid those unreliable pistons. Only about a third of the stop knobs actually identify pipes. The rests never worked or don’t work now. Never use these four stops because a note will continually hang on. You will discover many missing individual notes – the A and B above middle C do not sound at all. Many of the pedals do not sound. Avoid all the four-foot pipes because they are terribly out of tune. There is a constant hiss from air leaks. The swell door mechanism is unable to be repaired and the doors are jammed open. Turning the organ on or off produces many odd sounds, one of which resembles a coffee maker.”

Surprisingly, “most people may not have noticed any of these problems,” said Wright. “The organ contains around 2,000 pipes and one can ‘camouflage’ a lot by coupling unsounding pipes with sounding ones. But, if you are an organist, you want to have a reliable instrument on which to play.”

Furthermore, while “camouflaging” the organ’s many shortcomings made it possible to play it loudly, it was impossible to produce a sound soft enough to accompany a soloist.

“As a kid as a congregant of St. John’s in Union City, I helped the rector to service a 1907 organ there,” Wright said. “I remember having been inside the organ holding my finger over a valve that had failed as the organist played during a service conducted by Bishop Rath. I wasn’t afraid to look inside Christ Church’s organ.”

He discovered serious air leaks patched with duct tape, exposed wires, and pipes crowded together too close to be serviced, accessible only by dangerous, rickety ladders. However, it wasn’t until January 2021, during the pandemic shutdown, that he finally had the time to begin a serious study of exactly what was wrong with the pipe organ.

“I made a massive spreadsheet inventorying every possible note that could be sounded, what was missing, what was not sounding. Then I studied as many church records and histories as I could find to determine just how old this instrument was, who built it, and when it had been rebuilt, if ever.”

He found evaluations performed by three professional organ builders in 1980, following a 1978 fire at the church in which the instrument sustained considerable smoke and heat damage. “These evaluations were very useful to me,” he said.

However, he knew the church did not have the funds to make the necessary repairs. “So, I rolled up my sleeves, hired some college kids who were home during the shutdown, enlisted the help of my brother and nephew and set out to make the best of what we have.”

Initially Wright and his small crew worked on their own, cleaning out debris, mapping the pipes, and building safer ways to access them via new ladders and catwalks. They worked slowly and carefully, so as not to do any additional damage. “Pipe organs are like elephants – large but also very sensitive,” said Wright.

Wright admits that while he comes from a family of woodworkers, “I was the klutz – my father wouldn’t teach me how to use power tools because he was afraid I’d cut my finger off. I’m not anywhere near as gifted as my brother,” who is a cabinetmaker. He said his brother’s expertise was invaluable in building the ladders and catwalks.

After four months working on their own, Wright realized, “OK, now it’s time for surgery – and I’m not a surgeon.” He brought in professional organ builder Jim Konzelman, who was willing to work with them. Konzelman taught Wright how to make some repairs, such as patching leaky pipe stoppers or repairing disconnected wiring, which Wright in turn taught to his helpers. In this way, they continued to do part of the work themselves.

“When we showed Jim what we’d done, he said, ‘this work is excellent,’” Wright noted with pride.

They have completely rebuilt the mechanisms for the jammed swell doors, as well as the pneumatics under some of the pipes. Other pipes need to be replaced altogether; because they cannot afford new ones, they are buying used ones from a Pennsylvania company.

Up until this month, Wright has paid for everything out of his own pocket. Now the church has established an organ fund, with an anonymous parishioner promising to double any gifts up to $1,000.

Nearly a year into this project, Wright estimates that the organ renovation is 90% complete. “The organ is so much more versatile now. I can accompany a soloist with a lovely soft sound. People are noticing during the services.”

A rededication of the organ is tentatively scheduled for the Feast of the Ascension in May 2022. “I want the organ to be a sign of rebirth,” he said. He also hopes that it will encourage the re-establishment of a choir.

Wright’s advice for anyone considering a similar project: “Never tell yourself that something is too hard to do. Rather, focus on learning as much as possible about how this instrument works. Throw your ego away, grow and learn. Then when you reach the limits of your knowledge; get advice, and if you are lucky the assistance of an expert. If you are super lucky, as I have been, find an expert who allows you to work with him or her.”

Summarizing the project as complicated and challenging but also exciting and satisfying, he says, “This Covid shutdown has turned out to be a blessing in disguise.” 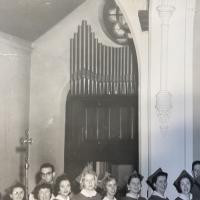 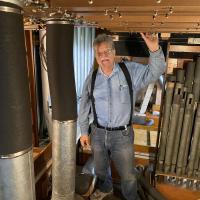 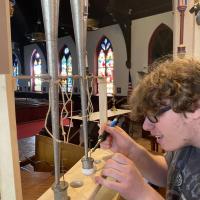 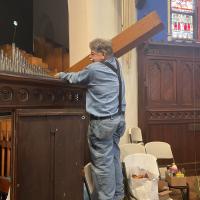 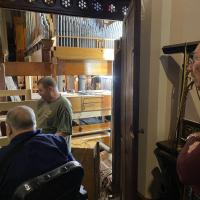 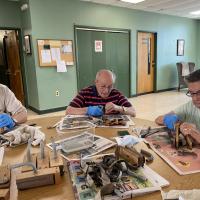 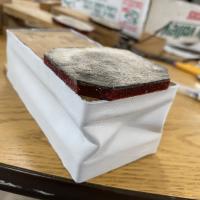 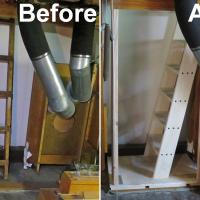 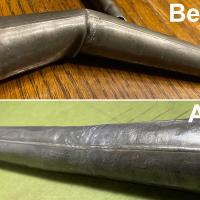 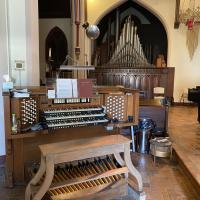