Nestled in the eclectic bedroom community of Montclair, New Jersey is one of the country's fastest growing college campuses. Spreading over 246 acres, Montclair State University has a diverse population of 18,000 students (3,700 of them resident on campus) and 4,500 faculty and staff. Every fall there are new students launching an entirely different experience of their life journey. Others are returning, perhaps to their final year of college. But, they share a common bond of life, love, fear, joy, pain, expectation... of being a community held together by the connectedness of human beings. And it is here that the presence of a campus chaplain, and participation in a faith community, can have a profound effect on a young person's life.

Understanding this, a group of Protestant clergy in the Montclair area from the Episcopal Church, the United Church of Christ, and several other denominations joined together to raise funds in support of a campus chaplain. They formed the Montclair Protestant Chaplaincy, funded entirely by donations from local churches and individuals. The first chaplain, the Rev. Ann Rolosky of the UCC, resigned in 2009 after taking on a full-time position in a parish. I assumed the role for the 2010-2011 academic year, and have been blessed by this ministry in so many ways. And thankfully, a donation from the Alleluia Fund helped to keep this vital ministry alive in the midst of economic struggles.

As a result of the Alleluia Fund, and the generosity of several Episcopal churches in the diocese, including Grace Madison, St. Peter's Essex Fells, St. John's Montclair, St. Luke's Montclair, and Grace Church in Nutley, this ministry continued this year to serve the spiritual needs of the students staff and faculty. One administrator said: "The Protestant Chaplaincy… has proven to be an integral part of the development of our students, especially those students who may have been marginalized or excluded from religious institutions in the past."

In this first year as the chaplain, I was privileged to provide pastoral care to students, participated in interfaith dialogs and activities, offered a Taizé mediation experience each week, created a Bible study series, lectured in classes, and much more. I also started a worship service on Sunday nights, reaching out especially to marginalized groups on campus. The small, but dedicated group of students who attend these services have formed a faith community for themselves, and are now enthusiastically making plans for next year. They have created a name for our new congregation, The Web of Life Christian Community: Where All Are Welcome And Equal Before God, and we are planning to apply for official recognition on campus. One student parishioner said in an email, "Thank you so much! I am glad God brought you into my life, because being gay and Christian was a strain for me -- thinking God was not hearing my prayers because I was gay. But seeing you, a woman of God, I know now that God loves us. God loves us for being Gay -- YAY!!"

I work closely with other chaplains, the Director of Equity and Diversity, Esmilda Abreu, and the Dean of Students, Rose Mary Howell, in all of the outreach on campus. This past year, we opened the Center for Faith & Spirituality (CFS), a sacred space on campus for prayer, meditation, small group discussions, and an office for chaplains to work and hold pastoral meetings. This is quite a statement for a State University, and this commitment by the University and its chaplains resulted in Montclair State University receiving the 2011 Youth Leadership Award from the American Conference on Diversity. The grand opening of the CFS was standing room only, and a video of it can be seen here:

Our weekly Interfaith Conversation is a highlight, with the students coming from a variety of faith experiences, including Catholic, mainstream Protestant, Evangelical Christian, Muslim, Jewish, Hindu, Buddhist, Wiccan, and seekers. 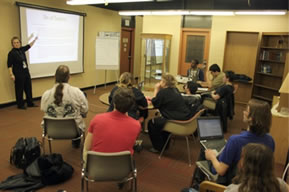 One of the more challenging, but highly rewarding, experiences came when I offered a four-part Bible series titled "Take the Bible Back: A Scriptural Self-Defense Class for the LGBT Community and Their Allies." The series covered the "Clobber Texts" using historical and literary criticism as a way of understanding these passages. The purpose was to engage this community with the Bible, encouraging them to embrace it through understanding, rather than rejecting it as archaic and toxic, and to defend themselves against those who would use it as a weapon against them. This was met with emails from those who asked "How can you offer self defense against sin!" or "How did you ever become a chaplain?" However, the series itself was well received by the LGBT community and most of the campus, with one student asking "How come no one ever told us this stuff before?" and another wanting to go buy a Bible. 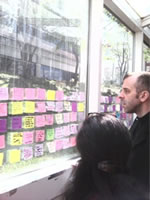 After a long year filled with poignant, challenging, and even funny moments, one discovery at the end of the semester underscored the need for chaplains on college campuses. Fr. Jim Chern, the Newman Center chaplain, and I were walking along the hallway with Esmilda Abreu after one of last Interfaith Conversations meeting, when we came across The Wall of Secrets. It was a project started by a student who got it from a website. Students could write a secret on a sticky note, drop it in a box, and it would be posted by the volunteers on this hallway wall for all to see.

Some of these were funny, some were thoughtful. But this one moved me to tears: "I almost committed suicide last week. I wish I had." And, as I took out my pen and wrote "You are a beloved child of God, and very much loved. Please call." and my number, I realized that there is so much work left to be done. Thanks to the Alleluia Fund, and the generosity of so many, the chaplain program can continue to make a difference on this campus.