On Sunday, March 16, I headed out to Los Angeles along with eleven other Rutgers students and one staff partner, to start a week of service to the HIV/AIDS population with Rutgers University Alternative Breaks (RUAB).

RUAB programs provide groups of Rutgers students with a semester-long experience centered on community service. Every group learns about a particular community issue during five weeks of pre-trip meetings and then take a volunteer break excursion. Each group finds a community partner who is working to better this issue and serves with them through the week. I had heard about the program from a friend of mine who raved about the time she had doing service in Guatemala, and I could tell from her story that RUAB was something I wanted to be involved with.

When I was in high school, I was able to do so much service but the older I got, the busier I got; so I knew setting time aside to serve others was past due. There were several different trips to choose from, but I knew I wanted to be a part of AIDing the Cause because HIV/AIDS heavily affects both Newark, where I live and Sub-Saharan Africa, where my family is from; and since my major is Public Health, we talk a great deal about this virus also. I was interested in being in community that was about service, while working on an issue that means something to me – and I loved the idea of going to LA!

In our pre-trip meetings, we spoke about the stigma that comes along with HIV/AIDS, as well as its history and the status of the virus globally, nationally and specifically, in Los Angeles. We also spoke about what it means to truly serve others, as opposed to helping them or trying to fix them. These meeting were very crucial in helping to focus our efforts especially in a city like Los Angeles, where it’s very easy to get caught up in all the superficial things.

Our particular community partner was AIDS Project Los Angeles (APLA), which is a non-profit organization founded in 1982 at the start of the AIDS epidemic. APLA serves HIV-positive people in Los Angeles County, providing them with access to medical transportation, supplemental nutrition, home health care and medical, legal, insurance and public benefits counseling. The other community partner we worked with was AIDS Walk Los Angeles (AWLA). These two organizations go hand in hand, but AWLA focuses more on the fundraising so that APLA can focus on the community. 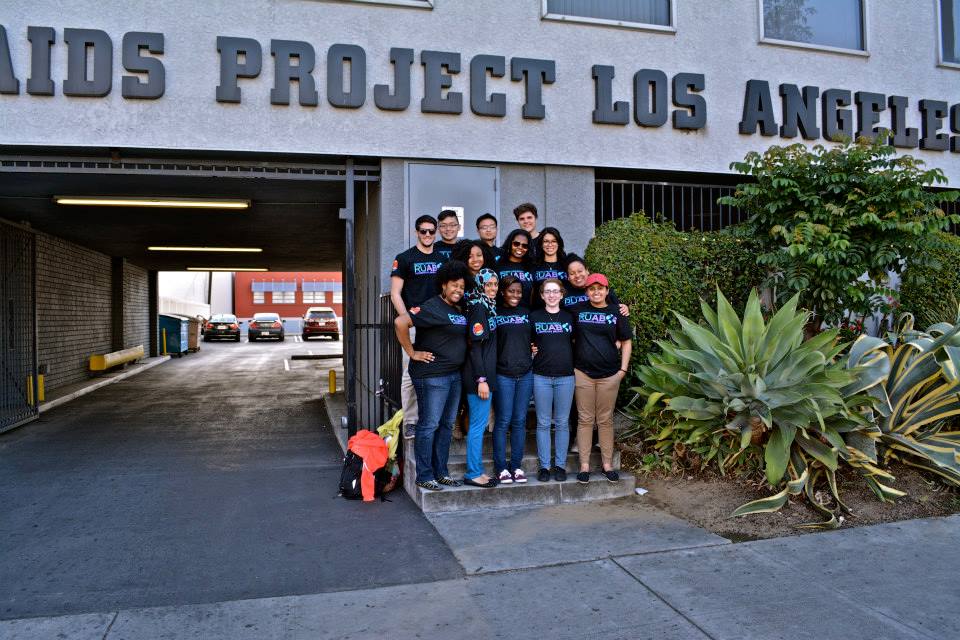 Before we were able to start our first day at APLA, a 4.4 magnitude earthquake hit Los Angeles at 6:30 a.m., so we knew we were off to an interesting start! When we arrived at the organization at 9 a.m., we were greeted warmly and educated about all the different services they provide, as well as HIV/AIDS itself. We learned that the majority of the work that is done at APLA is done by volunteers, so we weren’t surprised when we were shredding, filing, carrying boxes and stuffing gift bags. Although most of the work seemed trivial, we knew that we were allowing the employees to focus on the clients and helping the organization run smoothly.

Twice during the week, we had the opportunity to work at APLA’s food bank. That was the most rewarding time for me because I was able to interact with the clients but it reiterated the important lesson that HIV does not have a face.

This trip was missional because we were able to see how our presence affected APLA and AWLA. We were able to build relationships with most of the staff, as well as help them out with odd jobs. I feel as though I got more out of this trip than I put in because the fire for service was reignited in me. Being at APLA reminded me of Jesus’ servant leadership and how He was not afraid to make a statement and be seen in groups that were not socially accepted. I felt that the Holy Spirit was working through me during my trip because although RUAB is a secular organization, I found that I and many of my peers would often refer back to our faiths. I’m so grateful to have been given an opportunity to serve such a wonderful organization with an awesome group of people.

Supported and equipped by her home parish of House of Prayer in Newark, Dunstanette Macauley is involved in many areas of The Episcopal Church. On the diocesan level she is very active in youth and young adult ministries; has served on summer staff for Cross Roads Outdoor Ministries; and has recently joined Diocesan Council. At the last Annual Convention, she was elected to represent the diocese as lay deputy to General Convention 2015. In addition to attending Rutgers, she works as the Youth Minister at St. George's Church in Maplewood.