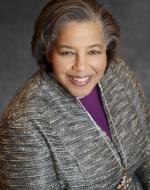 On May 19, 2018, the Rev. Carlye J. Hughes was elected as the 11th Bishop of the Diocese of Newark on the first ballot. Upon her consecration on September 22, 2018 at NJPAC, she became the first woman and African American to serve as bishop of this diocese.

A life-long Episcopalian, Hughes was born Tulsa, Oklahoma and raised in Ft. Worth, Texas. She earned a BA in Drama from the University of Texas in Austin, and for 20 years she made her home in New York City, while pursuing a career in Human Resources as a corporate trainer, mostly in the hotel industry.

While in NYC she discerned a call to the priesthood and attended Virginia Theological seminary, earning a M.Div. in 2005. After a Lilly Fellowship at St. James’ Church in New York City, she was called to serve as rector first at St. Peter’s, Church Peekskill NY; and most recently at Trinity Church, Ft. Worth, Texas. Hughes describes her ministry there as one in which she helped others “discover the ways they are called to serve God and God’s people… supporting, encouraging, and empowering them to go and do what God created them to do. Because, Hughes stated, “Today’s church is not one that can rest on the past while waiting for people to come and ask about the faith. Instead God is guiding us to be active participants in the world. An important element of my ministry… is to nurture and guide our capacity to build relationships with neighbors locally or on the other side of the globe.”

Hughes has been active on the Board of Trustees of The Virginia Theological Seminary; as a member of the Standing Committee, Commission on Ministry, Diocesan Convention Chaplain in the Diocese of New York, and in the Episcopal Diocese of Fort Worth as a member of the Standing Committee and as a General Convention Delegate. At the national level, she has served the General Convention on the Task for the Study of Marriage and the Racial Justice & Reconciliation.

Hughes is married to David Smedley and they have a dog, Abbey.

Bishop Hughes’ vision for the Diocese of Newark

In the richly diverse environment that is Northern New Jersey, I see the Diocese of Newark as a hub and network of support for those seeking a loving, compassionate, and just way of life. A life introduced decades ago by the Rev. Dr. Martin Luther King as the “Beloved Community.”

As our nation and world struggle with divisiveness and fragmented communities, the Diocese of Newark is an active and united community of diverse people in relationship with each other, with neighbors, and with all of creation. A community where God’s love, justice, and equality are lived and shared in tangible ways that go far beyond toleration or mere acceptance. God has created and called us to be loving, compassionate, and deeply spiritual beings who thrive in Beloved Community.

Without a doubt the most important work of the Diocese is nurturing the community of God’s love, compassion, and justice with our neighbors and the wider world. In the end it seems the only way to healing, reconciliation, wholeness, and vital communities is a restoring God’s love, compassion and justice in the life we share together. When this happens we are the Beloved Community.