Report out from the Episcopal Communicators Conference

"Geeks for God" Blog: Evangelism in the Electronic Era

Never mind the sin of pride, I’m going to start this post by bragging on behalf of the entire diocesan Technology Committee: when the Polly Bond Awards for Excellence in Communication were announced at the conclusion of this year’s Episcopal Communicators Conference (April 20-22 in Portland, OR), our blog Geeks for God: Evangelism in the Electronic Era received an Award of Merit – second place – in the category “General Excellence: Blog.”

I share this award with Technology Committee members and Geeks for God contributors Randy Johnson, the Administrator for Diocesan Ministries, and volunteers Jan Paxton, John Rollins, Steven Boston, Ken Boccino and Cliff Cernek. I am grateful to them for sharing their wisdom and expertise in so many areas of electronic communications, as well as their faithfulness in serving the diocese and its congregations.

As judged by Bill Tammeus, former Faith section columnist of the Kansas City Star, the awards were based on the blog’s content, consistency of message, curation, user experience, consistency of visual elements and successful use of the blog to achieve organizational goals. To give an idea of the competition, the Award of Excellence – first place – went to the Episcopal Church Foundation’s Vital Posts.

Our goal with Geeks for God, launched in January 2014, has been to provide guidance for church communicators trying to navigate the new and rapidly growing field of electronic communications with little in the way of time or resources.

Even before the awards were announced, I spoke to several fellow communicators attending the conference from across the country who told me they read Geeks for God and appreciate it as a resource. Who knew?

In addition, a piece by Bishop Beckwith, Stewardship: Gratitude or Obligation?, written for the Episcopal Church Foundation’s Vestry Papers, garnered its editor, Nancy Davidge, an Honorable Mention in the category “Writing: Editorial/Commentary.”

Other happenings at the conference

Our keynote speaker was the Most Rev. Michael Curry, Presiding Bishop and Primate of The Episcopal Church. It is an Episcopal Communicators tradition to invite the new Presiding Bishop to the first conference during their tenure. An MP3 audio recording of Bishop Curry's sermon is available on the media page of Trinity Cathedral in Portland, and below is a video of Bishop Curry's keynote address, by my counterpart in the Diocese of Utah, Craig Wirth (duration: 50:19).

Our chaplain was the Rev. Jay Sidebotham, known for his cartoons depicting Episcopal life, who preached at the opening Eucharist. The Episcopal Communicators board commissioned him to draw this cartoon to decorate our canvas "swag" totebags. 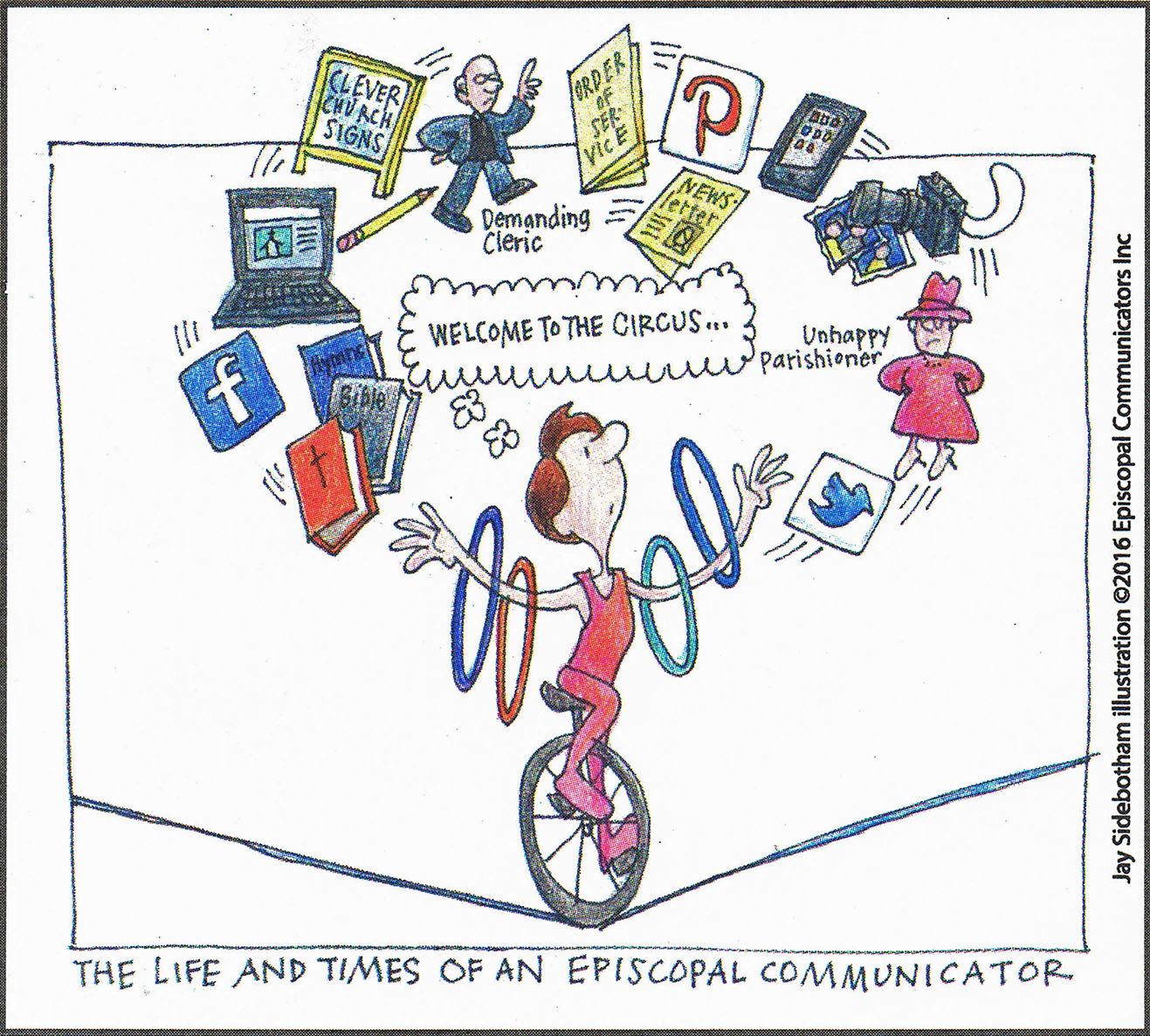 Who was Polly Bond?

Canon Greg Jacobs was acquainted with Polly Bond through his father, the Rev. Solomon N. Jacobs, whose tenure as rector of St. Andrew's, Cleveland overlapped Polly's tenure as diocesan Director of Communications. The Bishop of Ohio at that time was the Rt. Rev. John Harris Burt, a friend of the Rev. Dr. Martin Luther King Jr. and a bold supporter of the civil rights movement, and Canon Jacobs recalls that Polly was instrumental in communicating issues around racial justice. "Polly stretched peoples' understanding of what diocesan communications are all about," he said.

This video, produced for the 2014 Episcopal Communicators Conference, tells more about her life and ministry (duration: 3:47).

What is Episcopal Communicators, and who can join?

Anyone currently working in the ministry of communications in The Episcopal Church is eligible to join Episcopal Communicators, and I commend it to you highly. Annual dues are currently $75 per member.

There is also a private Episcopal Communicators Facebook group you can request to join (no dues required) where questions and tips are discussed daily.