The Invitation of Taizé

The Taizé community, named for the French town where the international and ecumenical monastic community began nearly 75 years ago, is known for its repetitive, chant-like music. It is also known for gathering thousands of people from all over the world to live in a community of prayer. (There were about 3700 pilgrims there during the same week as our diocesan group of nine young adults and four more seasoned adults.) But what stood out most for me during our week was the continuous invitation. The invitation to join with God in prayer – in song and in silence. The invitation to offer respect to one another – honoring all the linguistic, ethnic, religious and racial diversity that shows up every week. The invitation to be in deep communion with the living Christ.

One would think that with that many people coming from so many places with so many different habits and practices, that there would be no end of rules. There weren’t. There were some expressed expectations, but again, they came across as invitations.

The Taizé community takes this gift of invitation into the world. The community numbers about 100 monks; 75 of them are in Taizé itself and the rest are dispatched to trouble spots around the world – to pray and witness to peace. When I was last at Taizé, in 1999, several brothers were living in Bosnia, during the height of the civil war there – inviting Serbs and Croats to be in reconciliation with one another. During our week at Taizé, the brothers had arranged to bring a small group of young Palestinian Christians to be a part of the community for the better part of a month. For several years now they have welcomed Iraqi refugees to live in a house on the community grounds.

The Taizé way of invitation seems to be in sharp contrast with the way of the world – which more and more seems to be engaged in the practice of protection – of geographic and religious turf. Increasingly across the globe, we find that communities of people – be it a tribe, a nation or a religion, tend to be about the business of keeping and settling scores (an eye for an eye and a tooth for a tooth). They aggressively protect their self-interest. Given the number and intensity of conflagrations around the world, an invitation to mutual respect and honoring difference may seem like a fool’s errand.

Not for the Taizé community. They are passionate about maintaining a spirit of respect and invitation, all of which is rooted in prayer. And it has made an enormous difference. 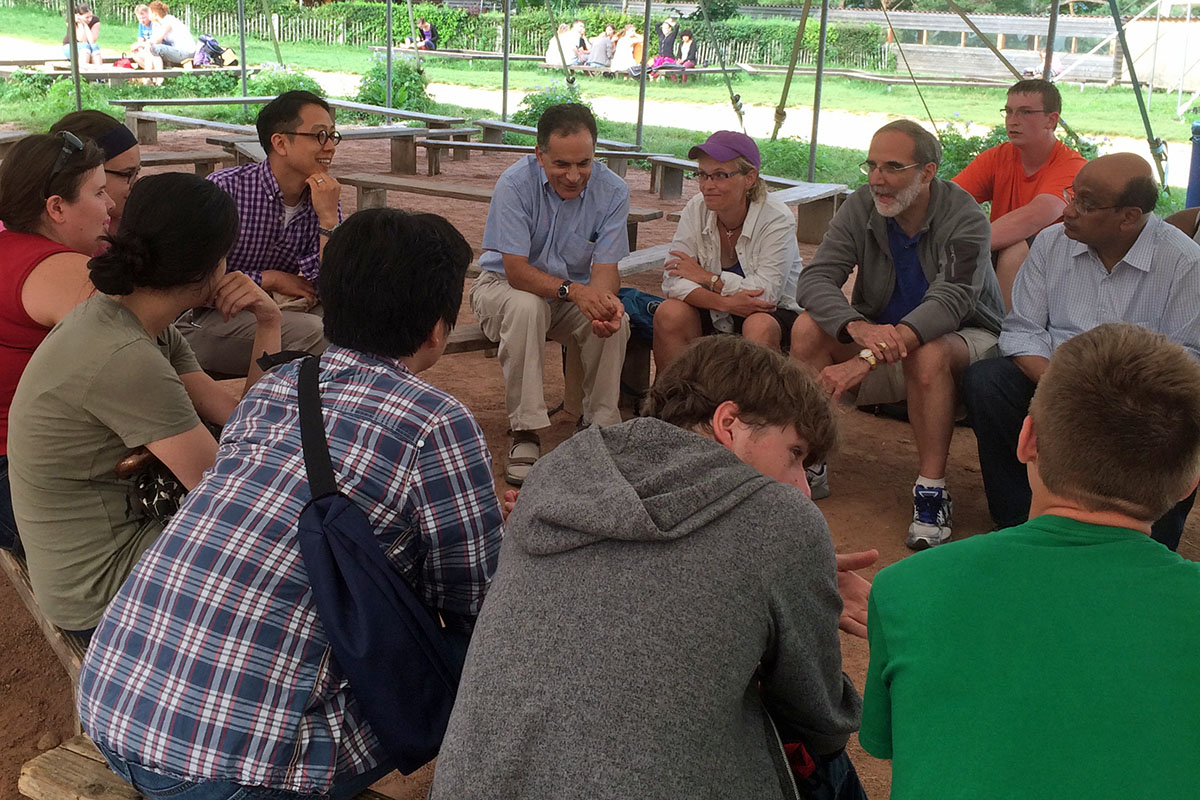 Taizé pilgrims from the Diocese of Newark joined with a group from the United Methodist Church in Boston for Bible study.
Sitting to Bishop Beckwith's left is Bishop Sudarshana Devadhar of the UMC's New England Conference.
YOUNG YOON PHOTO

The reach of the Taizé community extends across the globe. Many of our congregations host Taizé services. Part of it has to do with the combination of candlelight, Taizé music and silence – but I am beginning to think it is more about invitation. Which, when grounded in God, has a power all its own.

In the spirit of invitation, I am going to offer blessings on Thursday, September 11 at Newark Penn Station, the soup kitchen at St. John’s Church next door to our offices – and at the newly refurbished Military Park, where our Cathedral is located. I invite you to join me in offering blessings in your own community on the day which has become an unofficial day of remembrance. Episcopal House will provide some prayer resources for you (they will go up on our web site by the beginning of September).

I invite you to join in the work that God is already up to.

HELLO BISHOP THIS BLOG WAS SO INSPIRATIONAL AND IT THOUGHT ME A WHOLE LOT!
IT THOUGHT ME HOW THE CHURCH AS WHOLE SHOULD WORK,THIS BLOG SHOULD BE THE FOUNDATION OF MISSION WORK ACROSS THE EPISCOPAL CHURCH AS-WELL-AS THE WORLD

Servant of Christ and preach of the gospel,